Filed under: Uncategorized — carlawordsmithblog @ 10:00 am 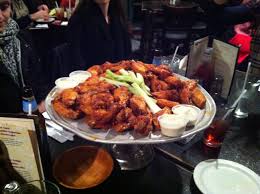 Super Bowl Sunday is upon us tomorrow and I, along with millions of others, will be eating my share of wings. Chicken wings that is. Buffalo chicken wings.  As a matter of fact, it’s estimated that Americans will eat a record 1.4 billion of tasty wings this weekend. But what are they exactly? And I mean exactly?  Yes, you will find teriyaki, BBQ, and a host of other flavored chicken wing options, but there’s really only one real wing: The Buffalo Chicken Wing. When made right, they are uh-mazing and they have an interesting history as I learned many years ago from my Buffalo born and raised husband. 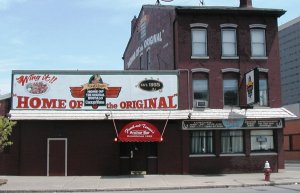 No, Buffalo wings aren’t buffalo meat (buffalos don’t have wings), and no, Chili’s didn’t invent the wing nor did Pluckers or Buffalo Wild Wings. That honor belongs to Frank and Teressa Bellissimo. Here’s the story: Frank and Teressa established The Anchor Bar and Grill in downtown Buffalo, NY back in 1935 and had quite the popular neighborhood watering hole. But, it wasn’t until 1964 that the hole-in-the-wall became historic.

It was on a Friday night in 1964 that their son Dominic and a group of friends told mamma Bellissimo they wanted a late night snack. Teressa looked around and saw some left over chicken wings, which were usually tossed or reserved for stocks or soups. Knowing she needed something fast and easy, she deep fried the wings and then tossed them in a cayenne hot sauce. She served them with celery stalks and bleu cheese dressing because she also had extras of them lying around and the rest, as they say, is history.

Teressa’s wings were a hit that night and it didn’t take long for word to spread that the Anchor Bar had a great new dish. Today, the original restaurant at the corner of Main and North Streets is considered the birthplace of wings and still serves up its famous fingerlings, as do restaurants around the world.

I will say however, that nowhere in the world are the wings as good as what you get in Western New York. And I say “wings,” not “chicken wings” or “Buffalo wings,” just “wings,” as that’s what they’re called by locals. Finding them elsewhere is a bit like looking for cheesesteaks in Oregon, Tex-Mex in Maryland, or gumbo in Iowa. They just aren’t comparable or even close to the real deals.

Wings in Buffalo are so delicious that I truly can eat a dozen of them all by myself. They are most often accompanied by drums and are big, crispy, never greasy or runny, and just the right amount of spicy. If you want them hot, you can but be careful, as your mouth will be on fire. My husband says he remembers eating wings so hot that he’d run outside and put his lips in the snow. I don’t know if that’s totally true but it makes for a great story!

Deep-fried chicken wings are nothing culinary new and have been a southern staple for years, but most of those wings are breaded. Buffalo chicken wings are never breaded. You simply fry them up and then then coat them with a level of hot sauce to your choosing. Simple, classic, and delicious. And please, no ranch dressing on the side. Bleu cheese only is the way to go.

No trip to Buffalo is complete without a stop at the Anchor Bar but if you can’t make it to the original location, not to worry, there’s one right inside the Buffalo airport. So, as you make your way out of the airport on your way to perhaps Niagara Falls, be sure to stop and get you some wings before heading out.

Wings are so sacred in the Buffalo area, that friends and family actually argue over which neighborhood spot has the best ones. The most popular one in my husband’s hometown village of East Aurora (where Mr. Fisher and Mr. Price started Fisher-Price toys in their garage, where America’s Arts and Crafts movement began more than a century ago with the original Roycrofters and thinker Elbert Hubbard, and home of The Millard Fillmore House that was once the residence of the 13th president of the United States), called the Bar-Bill Tavern takes no reservations, accepts only cash, and only recently began offering take-out wings. It also always makes local and national “Best Buffalo Wings” lists.

In 1977 the city of Buffalo issued an official proclamation celebrating the Anchor Bar and its owners and declared July 29, 1977 “Chicken Wing Day.” Frank Bellissimo died in 1980 at the age of 84 and Teressa died a year later in her apartment above the bar. They both passed at the age of 84. Dominic, the son whose late night cravings resulted in his mom’s famous wings, later owned the restaurant. He died in 1991 and in 1999 the franchising of Anchor Bar restaurants was established. An Anchor Bar bottled sauce line launched in 1999 and today can be found in more than 3,000 retailers. The world-famous brand was even included in a “Simpsons” episode.

I’m not quite sure how wings became so entwined with football watch parties but maybe it’s because they are a popular bar food, they are a filling finger food, and they are so dang good.

So there you have it, the story behind those wings you’ll be munching on during the Super Bowl and above you have Teressa Bellisimo’s original recipe. Now you know they’re not only yummy but truly a beautiful thing. They are bellissimo!