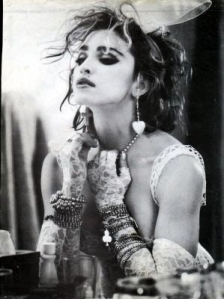 “Poor is the man whose pleasures depend on the permission of another.”  Madonna

Has it really been 30 years since Madonna released her first album?  Say it ain’t so!!!!  If I didn’t feel old before, I certainly do now.

July 27, 1983 was the date that then unknown Madonna Louise Ciccone released her self-titled album and the rest, as they say, is her-story.  Her story is one that forever changed the face of music and a story that continues to be unfold.

I was living in Oklahoma when Madonna’s rag-tag-Lower-East-Side style hit the radio and lit up MTV. (the network actually showed videos back then!)  Unlike many, I didn’t dress like her because I was graduating and working in TV, but I wanted her confidence and her swagger.   I loved everything about her and to this day, “Borderline” is one of my favorite songs ever.  Her film “Desperately Seeking Susan” captured my imagination and set off my love affair with New York City.  I adore the song “Get into the Groove” from the movie, I followed her romance with Sean Penn, and even liked her in “Dick Tracy.”  Madonna owned music and specifically MTV, whether it be in her “Like a Virgin” wedding dress or successfully competing with the likes of Michael Jackson, U2, The Police, Cindy Lauper, and others whose albums helped make it one of music’s most exciting and influential times. 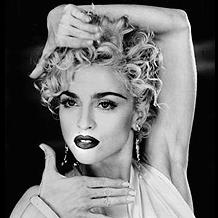 Fast forward 10 years or so and I was living in Austin and working at The Frank Erwin Center.  By then Ms. Ciccone was unmistakably a one-name wonder and had morphed into a glamorous Marilyn-like music mogul.  I remember loving “Vogue” and doing the dance with co-worker Liz and anyone I could find who would do it with me.

Then, Madonna got nasty, and I don’t mean cruel.  She released her “Sex” book and “Erotica” album and my respect for and admiration of her ended as quickly as her movie career did.  Things picked up for her a bit years later with the release of “Music,” and I really like the song “Don’t Tell Me” and its accompanying video,  but it’s never been the same for me.  Today’s version of Madonna bores me.  I’m not impressed with her style, her music, her phony British accent, or her ever-changing plastic surgery face.

“Rolling Stone” magazine once described Madonna’s voice as “irritating as hell,” but keep in mind this is the same publication that just put an alleged terrorist on its cover.   She may be more ambitious then talented, but she’s talented nonetheless.  She is the top-selling female artist of all time and has sold more 300 million albums…300 million!!!!  Early on she invented her own brand of controversy, singing about an unwed pregnancy in “Papa Don’t Preach” and dancing with saints in “Like A Prayer,” but she brilliantly mixed those questionable tunes on CDs with beauties like “Cherish” and “Live To Tell.”  At the very least, Madonna single-handedly paved the way for all the subsequent Lady Gagas and Keshas.

Much like Britney Spears will always be Kristen’s all-time fave though, Madonna will be mine.  Unlike Britney however, Madonna does possess some real talent and musical skills.  I’ve always liked that she writes her own music, controlled her own career,  and did things her way.  She sported a “Boy Toy” belt but wore the pants in her family.  She didn’t ride on anyone’s coat-tails or reinvent already popular styles.  She was a style…one that millions imitated.  She also didn’t become addicted to drugs or close down Hollywood nightclubs with fellow wannabees.  No, this is the woman who famously told Dick Clark on “American Bandstand” that she wanted to “rule the world.”  I’d say the University of Michigan drop-out did just that, at least when it comes to pop music.  She may live in England now, but the Detroit native will always be the All-American pop princess and my favorite material girl.