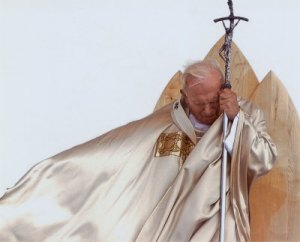 There is no saint without a past, no sinner without a future.

“We declare and define John XXIII and John Paul II be saints and we enroll them among the saints.” And so decreed Pope Francis today in Rome. It is official. Pope John and Pope John Paul are now saints. How blessed are we to witness such history.

What is it, you ask, about Catholics and their saints? Why do we “adore” them so much? Who are they anyway and why should you care?

As a cradle Catholic, I have long prayed to saints and have my favorites. St. Jude is my mom’s patron saint and one I have forever held special in my heart. I know the prayer to him by heart. I also love St. Francis, St. Therese, and St. Ann – the blessed mother of Mary. I pray to them often. I have statues and pictures of them throughout our home. But why? Why not just pray to God you ask?

Well, the saints are my friends. I count on them and ask them to pray for me and my loved ones much like you ask friends and family to pray for you and your loved ones. It’s really that simple. Yes, of course I also pray to the Holy Trinity of God, Jesus and the Holy Spirit, but “when more than one gathers in my name,” the more the merrier, right?

Let me make this straight, Catholics do not worship saints in the same one we worship God. We merely respect and admire them and acknowledge that they lived lives right here on Earth just like we do but their lives were filled with great charity and heroic virtues. They are in heaven and have God’s ear so to speak.

As Pope Francis said today, “They were priests, bishops and popes of the 20th century. They lived through the tragic events of that century but they were not overwhelmed by them.”

Here’s another analogy. You want to buy a new computer but you don’t go straight to Bill Gates, you go to a store and ask for the help of one of Microsoft’s agents, right? The saints, then, can be thought of as, on the simplest of simple terms, agents of God. Go to them, they will help you find answers!

“There is no heartache that heaven cannot heal.”

History Today
Today’s formal papal decree in Vatican City was historic on many levels. It was the first time in the Catholic church’s long and notable history that two ex-popes were canonized at the same time and never before had a reigning pope and a retired pope, Pope Francis and Pope Benedict XVI, celebrated Mass together in public, much less one during which two of their predecessors were formally declared saints in heaven.

It’s no surprise then that an estimated 800,000 pilgrims descended on Rome for today’s dual canonizations and another 300,000 watched the event on giant TV screens set up throughout Rome. Also witnessing this historical event first-hand were some 24 heads of state; dozens of royalty; and hundreds of cardinals, bishops, priests, nuns, and deacons.

Much like Princess Di’s wedding and funeral (I know, a bad comparison but if you know me, you get it), I recorded the event and have been watching it in all its glory today. Such pageantry, so much history.

It’s hard to argue that John Paul was and is a true saint. I remember when he was as near as San Antonio years ago. He loved to travel and meet the people, visiting more than 100 countries and becoming one of the world’s most-traveled leaders. “The People’s Pope,” John Paul was born in Poland and was the first non-Italian pope in more than four centuries. He was extremely popular and is widely regarded as being a major force in the collapse of communism and the fall of the Soviet Union.  He was so powerful yet so humble.  There are thousands of photos of him that I could have chosen to include in this blog, but the one I did has always been my favorite.  Much like him, it shows his strength and his humility.

John XXIII, on the other hand, is perhaps more obscure, even to me, but no less worthy of sainthood. He is held in high esteem for calling the 1962 Second Vatican Council, most commonly referred to as Vatican II. The somewhat controversial process basically modernized the church and led to numerous reforms; including the replacement of Latin at all masses and having priests face worshipers during mass. I remember when a priest’s back faced us during an entire mass and I remember when it all changed. It was indeed a big day. Sadly, John XXXII didn’t live to see the achievements of Vatican II.

Kristen and I will visit Rome this summer and will witness a papal audience in that very St. Peter’s Square. It gives me chills just thinking about it. I plan to look up and ask God and all His saints for their intercession and hope to walk away doing as St. Francis once said, “Preach the gospel, and when necessary, use words.”

All I Need to Know I Learned From the Easter Bunny

Don’t put all your eggs in one basket.
Everyone needs a friend who is all ears.
There’s no such thing as too many treats.
Eggs and carrots are good for you!
A cute tail attracts a lot of attention.
Everyone is entitled to a bad hare day.
All work and no play will make you a basket case.
It’s okay if some body parts are floppy.
To show your true colors you need to come out of your shell.
Jumping and hopping are great exercise.
The grass isn’t always greener in someone else’s meadow. 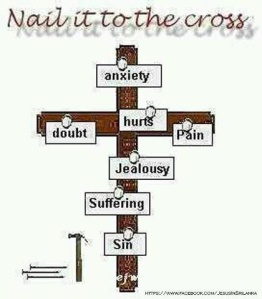 I ran across “The Help” last night on TV and was instantly mesmerized. I had forgotten what a truly wonderful movie (and book!) it is. Never, ever forget…

I ran across “The Help” last night on TV and was instantly mesmerized. I had forgotten what a truly wonderful movie (and book!) it is. Never, ever forget…

A Lot of Baggage

Filed under: Uncategorized — carlawordsmithblog @ 12:00 am 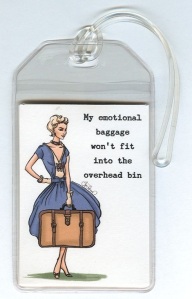 Family members and friends I’ve travelled with were pleased to recently learn that “Big Momma” went to luggage heaven. The well-travelled and oversized piece of luggage was near and dear to my heart but it was the bane of travel for many. It was huge and it was heavy. It could fit so much and was with me for so many years. Big Momma went with me to Europe and on so many family vacations, she went along with me on all of my annual OU girls’ trips, and she was there when I moved Kristen into her college dorm. Years of wear and tear finally caught up with her though and after a serious banging up by an airline earlier this year, it was time for me to replace Big Momma.

Have you shopped for luggage lately? It’s everywhere and there are so many different styles and brands. Spinners, hard-backed, soft-sides, and colors and patterns that will catch anyone’s eye on an airport baggage carousel. I knew I wanted something durable, something somewhat affordable, and something big. I found a bag I think I’m going to love and am amazed at how much lighter it is then Big Momma was…empty! I can fill this baby even more!

All this brought back memories of my parents’ tan colored suitcases like the one above. I remember how the handles felt in my hand and how those vintage Samsonites smelled. How weird to even think of carrying your luggage though, right? A virtual nightmare if you ask me! Well, if you’re as grateful as I am for wheeled luggage, you have Bernard Sadow to thank. Who?! And Macy’s. What?!

Mr. Sadow is credited for introducing suitcases that rolled and for that one reason will forever be hero of mine and many! But, surprisingly his wheeled contraptions weren’t immediately accepted and Saddow actually had trouble selling the idea for them. He was repeatedly told that nobody would ever buy a suitcase on wheels by department store buyers across New York City. Crazy, right?!

Sadow, the former president and owner of U.S. Luggage, had long been in the business of suitcases and came up with his brilliant idea nearly 45 years ago. Wrestling with his bags at an airport in Puerto Rico, Saddow noticed a man moving a piece of machinery on a wheeled platform and, as they say, the rest is history. Bingo.

Still, after weeks of rejections again, Saddow finally hit pay dirt when a Macy’s vice president liked the product and set his buyers buying. Macy’s sold the first ever rolling suitcases in October 1970 but, as wonderful as they sounded, they still had problems.

Remember those first rolling suitcases? I do! Wheels were mounted on their narrow bottoms, leaving users struggling with wobbling and tipping. Plus, there were those crazy straps that we pulled them with. Yes, the new bags were easier then carrying a bag, but often times you ended up doing so anyway.

It wasn’t until nearly 20 years later that today’s popular version of a suitcase on wheels was born. Pulled on two wheels, they boasted convenience and a handy-dandy retractable handle. Invented by Northwest Airlines pilot Bob Plath in the late 1980s, the bags were dubbed “Rollaboards” and were the start of the luggage company Travelpro, still the top choice for airline industry employees and other frequent fliers. If anyone knows travel, it’s pilots and flight attendants, right?

Next Page »
Beyond Words
Blog at WordPress.com.
Loading Comments...