Happy St. Patrick’s Day…the day when we’re all Irish, we wear green, we pinch family and coworkers, and the river in Chicago flows green…on purpose! It’s also the day when we see lots of shamrocks and four-leaf clovers, but what’s the difference between the two?

The shamrock has three leaves, is considered a clover plant, and is the national symbol of Ireland. Legend has it that it’s what St. Patrick used to teach the Holy Trinity when he travelled in Ireland as a Christian missionary. Patrick was actually born in Great Britain but was captured by Irish pirates when he was 16. He later escaped, returned home, but ultimately heard his calling in the Emerald Isle where he later served as bishop. He is considered the country’s patron saint and March 17, the date of his death, is both a religious and national holiday in Ireland. 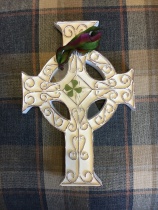 My bookmark on a cross of St. Patrick

A four-leaf clover on the other hand, is the result of a mutation in the clover plant that causes it to sprout four leaves instead of the normal three. These four-leaf wonders are very rare and are considered a universal symbol of good luck. May you find one today!

It’s also interesting to note that the Union Jack, the flag of the United Kingdom, is made up of three different crosses:

On that note I will leave you with what is my favorite of the many Irish blessings and sayings: 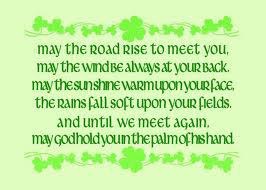 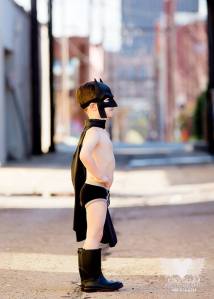 I read a blog today on idolizing and was most struck by the fact that it talked about today’s idols are sometimes the regular people in our lives and not just the people I thought it would mention: movie stars, athletes and other famous celebs. Yes, we will probably forever look up to our favorite athletes and religious mentors but whoever it is we idolize, we put on a pedestal. That’s when, my friends, we tend to be let down because the higher the pedestal, the bigger the fall. It might be my Oklahoma Sooners who let me down, but it could also very well be my daughter or my husband. And vice-versa.

I feel let down today by someone I don’t idolize per se, but who I admire and respect: Marco Rubio. I was let down by his recent stooping to Donald Trump’s juvenile level of personal insults and by his dismal showing in his home state of Florida’s presidential primary yesterday. It appears my pick for president has officially suspended his campaign. He was supposed to be my American Idol but instead he’s now merely “the voice” behind that face. I’ve liked Rubio since the 2012 election and wished then that Mitt Romney would have picked him as his running mate (and still think he would have won if he had.) But now, I’m left without a candidate, a pervasive mood among both Republicans and Democrats I fear.

“A democracy will cease to exist when you take away from those who are willing to work and give to those who would not.” Thomas Jefferson

Maybe we put our politicians on waaaaay too high of pedestals and then become angry when they don’t live up to their campaign promises. We also expect waaaay too much from them.

Take the “free college” guarantee being thrown around by Democrats. Think about it. Is that really possible? Cue the critics but who will pay professor and staff members’ salaries? How will the electric and internet bills be paid by the hundreds of universities? I’m looking at you Harvard, purveyor of all things progressive.

Free is never free. It bears repeating: free is never free. And what about worth? Doesn’t something need to have value in order to be desired? Well if everyone can get a college education at no cost, what is the value of that degree? In addition, who will choose to take on the jobs all societies need like plumbers, and builders, and electricians if they can instead go to college for free? And that wall Donald Trump vows to build and make Mexico pay for it? Does anyone really and truly believe that is going to happen? Uh…no.

“If God wanted everyone to be the same, He would have made it so everyone had braces on their legs.” Forrest Gump 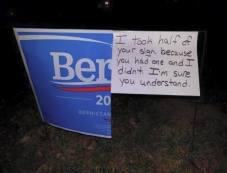 It all goes back to expecting our candidates to be someone they simply are not and cannot be. Bernie Sanders can no easier promise free college to everyone in the U.S. than I can. His Socialistic “spread the wealth” philosophy has failed every time it’s been tried in other countries (please see Cambodia, Romania, Poland, East Germany, and a little place called the Soviet Union) and his “I’m on your side” tirade is, well, tired. Why is working hard, sacrificing, and succeeding suddenly been a bad thing? Nationalizing the economic production of our country will not work. Capitalism and private sector incentives will. Remember, government does not invest, it spends. It won’t invest in you and your family and what it spends is other people’s money. Your money. It can also raise taxes to increase capital. Your taxes. What is left is a dependent society not increased production or drive. It’s not social justice as elitists would have you believe, it’s, in the words of Winston Churchill, “the sharing of misery.”

“Does it ever get cold on the moral high ground?” Downton Abbey

But all those uniformed protestors and “I want it all” millennials don’t realize all of this. They hear “free” and they vote. Ugh. We have become a society that only hears what it wants to hear and what sounds good rather than one that uses its critical thinking and common sense. And yet, any candidate who tells potential voters “you deserve more and you deserve better” is often judged on their good intentions rather than on their results. No one blames them for making unreasonable promises because “they care.” Ballyhoo. I call B.S. When I hear current complaints about inequality and underrepresented that Sanders and Hillary Clinton preach to their supporters, all I can think is “but you’ve had control for the past eight years!” Maybe all that “hope and change” was unrealistic or maybe it had more to do with fundamentally changing America as a whole and less on giving hope to real Americans.

Not everyone reading this will agree with me, and that’s okay. I can’t expect everyone to think like me and have the same opinions as me. The “Greater Things Today” blog also said doing so is another way we put people on too high of pedestals. I have a lot of respect for some of my friends who I disagree with and I also realize that what I feel or believe is not always entirely right. At the same time I need to realize that who I do admire (and idolize?) will undoubtedly disappoint me.

Worshipping your own good works is also a form of idolatry and one to steer away from. So you’ve completed a marathon, quit drinking, or reached a work goal. Those are all great accomplishments and deserve praise, but it’s wrong to think that because of doing so you are complete and have no other changes to make or goals to reach. Be careful of idolizing yourself just as you are cautious of idolizing others.

As for me, I’ll take my Marco off his political pedestal and continue to search for the next true American idol.