Filed under: Uncategorized — carlawordsmithblog @ 2:30 am 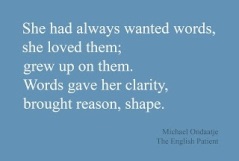 “God, bless America. I added the comma and the lowercase “b” because, without them, it seems like we are making a demand of God, rather than approaching God with the humility of a people who have already received so much.”

That, from one of my favorite blogs, “Life After Tampons,” on July 4th. The author, Jennifer Boykin, nailed it and inspired me to write a blog I’ve wanted to compose for some time now: one on writing and all things regarding language and the written word.

Wait! Don’t go! This will be good and not boring. I promise. You have my word! 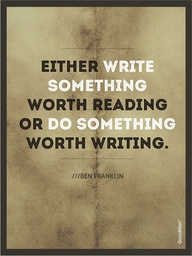 Fair enough, but considering the fact that our 50 states don’t speak different languages, (well sort of…more on that later!) we really don’t need to. Imagine, as someone living in Texas, if neighbors in New Mexico, Oklahoma, and Louisiana all spoke an entirely different language then you. Well, that’s how it is in Europe so a Spaniard knowing French isn’t all that uncommon or surprising. What is remarkable however is, considering English is the official language of the U.S., how we as natives often butcher it up.

This brings us to what I like to call the GaPS we all struggle with: Grammar, Punctuation, and Spelling.

The Power of Punctuation
Nothing makes me more angry then using apostrophes when the intent is plural, not possessive. 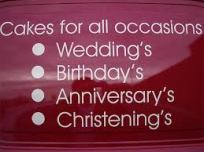 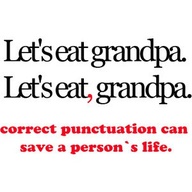 Spell-bound
With today’s computers and spell-check apps, there is no excuse for incorrect spelling. Still, it’s everywhere. I’ve been guilty of it myself. I re-read and preview everything before I post, but I have still caught spelling or grammar errors that slipped by. I hate when that happens!

Grammatically Incorrect
What exactly is grammar? Basically it’s the rules of a language. Sometimes it’s simple, and sometimes it’s confusing. Consider “then” and “than” or “affect” and “effect.” I always have to think about these sticklers. Here’s how I’ve sorted them out: “then” is used for time and “than” is used for comparisons. Meanwhile, “effect” is usually a noun while “affect” is usually a verb. If unsure, substitute either with a verb and if that verb works, use “affect.” I love this stuff and could go on and on (lie/lay, like/as, farther/further, etc.) but I promised not to bore you!

“The art of writing is the art of discovering what you believe.”
Gustave Flaubert

Writing helps me figure things out and it’s a means of sorting through my thoughts. I write down everything. Grocery lists. To do lists. Books I want to read. Quotes I love. I journal. I blog. It’s fun for me and it’s cathartic. It comes easy to me. I know I’m blessed in that way and I’m very grateful. 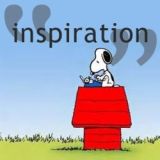 I also love to edit, which isn’t always common among writers. You usually like one or the other. I happen to adore both, and as anchor Scott Pelley of the “CBS Evening News” says, “There’s no such thing as good writing. There’s only good rewriting.” 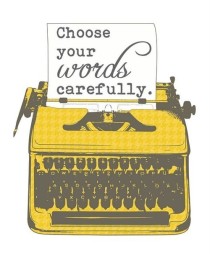 “If any man wishes to write in a clear manner, let him first be clear in his thought.”
Johann W. von Goethe

Written or spoken, words are powerful. They say (literally!) a lot about you. Some go so far as to recommend always keeping your words soft and sweet just in case you have to eat them! Seriously though, as author Sonia Choquette wrote, “Your words are the greatest power you have. The words you choose and their use establish the life you experience.” 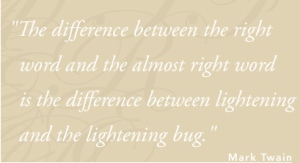 You don’t have to be timid with your words, just be smart.  The quote above, that from day one has been front and center on my carlawordsmith.com website, kinda says it all.  Edit both your spoken words and your written words but take a cue from Louisa May Alcott of “Little Woman,” who said, “I like good strong words that mean something.”

This may all be good for the “globalization” of America, but it is wreaking havoc in our schools. Should those non-English speakers be taught in their native tongues or in English? There are so many arguments for and against both sides that it would take an entire additional blog on my part to address them all.

To complicate things even more, many Americans say things differently, and I’m not talking just accents. Local colloquialisms are not “foreign” to any of us. Supper or dinner? Soda or pop? Sofa or couch? Ya’ll or you guys? All of this can be found in the “Dictionary of American Regional English,” or DARE. The book has more than 60,000 examples of various phrases, syntaxes, grammar usages, and pronunciations used across our nation, as well as their origins. It is considered a national treasure by linguists and is used by everyone from teachers to dialect coaches to translators. It’s also just fun to read…although it encompasses nearly 6,700 pages. My other favorite reads on this subject? “The AP Book of Style,” which I consider my style bible, and Strunk & White’s “The Elements of Style.” Yep, I’m all about style; both for the written word and for the clothes we wear!

Gender Bending
Another interesting area of language is that of the new trend for gender-neutral wording. We are all familiar with “chairman” being replaced by either “chair” or “chairperson,” but did you know it’s now recommended that writers use “handwriting” instead of “penmanship,” “first-year student” instead of “freshman,” and “outdoor enthusiast” rather than “sportsman?” What are your thoughts about this?

Making one think about what word to use is a good thing in some ways though. Increasing your vocabulary is something we should all be working on regardless of our age or profession. In a world obsessed with technology, how refreshing is it to hear actor Tim Robbins praise his dad for turning down a company job so he could continue singing and writing folk songs during the 1960’s. “I told my dad that if he had gone the other route, I wouldn’t have the vocabulary I have.”

“The best kind of fame is a writer’s fame. Just enough to get a good table at a restaurant and not enough for someone to interrupt you while you’re eating.”
Author Fran Lebowitz

Along with playing professional tennis, winning a gold medal, or being a back-up singer in Jimmy Buffet’s Coral Reefer Band, my dream has always been to be a best-selling author. Chances are that’s not going to happen but maybe, just maybe, I can get a job coming up with all those great OPI nail polish names!   How fun would that be?!

And speaking of fun, here’s an amusing tidbit to send you off with:  there are no words in the English language that rhyme with depth, month, orange, silver, or purple.  See I told you this wouldn’t be boring!