I want to preface this blog by saying I do not like going to the grocery store, I’m not one of those who enjoys cooking or experimenting with different foods, and I’m the first to admit that if I ever win the lottery one of the first things I’ll treat myself to is a personal chef who will cook for me and shop for me. Okay, I said it, I own it, and now I’m writing about it. Grocery shopping that is. Say what?

On a girls getaway over the weekend the recent grand opening of a ginormous HMart Asian Grocery was the topic of conversation. Word on the street was that it’s good, it’s different, and it’s HUGE. The store encompasses nearly 70,000 square feet…that’s bigger than a football field…and took over the space formerly occupied by Sports Authority AND Bed, Bath & Beyond. When I hear these numbers, it’s beyond me how anyone isn’t overwhelmed just walking into the place. I’ve yet to do so.

But, a person’s grocery store is a special and personal place, as I came to find out when we moved just a little more than a year ago. Even I, a self-confirmed non-liker of grocery shopping, missed my former grocery store! I longed for it and am only now warming up to my new one. Think about it; there are few things in life as daunting as doing major shopping in a grocery store you’re unfamiliar with. It can take twice as long and be three times as frustrating.

Grocery stores are big business. Annual sales hover around $7 billion and the industry employs nearly 5 million Americans. And as HMart demonstrates, big stores are not uncommon with just over 40,000 square feet being the median grocery store size. That’s a lot of crackers and cucumbers! In fact, the number of products found in an average grocer in 1975 was a mere 9,000. Today that number is nearly 40,000. I’m pretty sure half of those items are just toothpaste and cleaning supply choices. Good night. What ever happened to simple toothpaste and a do-it-all disinfecting cleaner?  But I digress.

Still, all is not well in the industry. Classic brick-and-mortar supermarkets are facing super competition from the likes of Amazon and in-home meal kit delivery services. So what are they doing to adapt to growing competition, unique millennial shopping habits, changing technology, and finicky consumer demands? They’re strategizing how to get you in their stores and changing up traditional product placement on shelves. 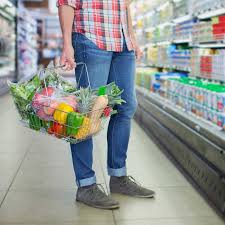 It’s all about keeping customers coming in and getting those customers to spend more. Consumer psychology research is in full force and has revealed many a trick of the trade. It all starts right as you enter the store: carts are big enough to fit enough food for a family of, I don’t know, say 20? Once inside, you’re often greeted by fun and festive seasonal items that put you in a good mood and are most likely adjacent to the produce department. After filling your cart with kale and zucchini spirals, the thought is you will feel healthy and good about yourself as you make your way to the more non-healthy aisles. This is where you’ll find cereal boxes and chips placed on lower shelves so they are eye-level, which attracts attention, and the placing of previously “middle aisle” products in the prime supermarket real estate of the perimeter. Traditionally the place to find produce, meats, and dairy products, some stores are now placing boxed items and even paper products on the outer rim aisles. The coveted front-of-store end caps and checkout aisle shelves are also being used in unique ways not previously seen.

Combo shopping is also in full force. Think all those “buy spaghetti sauce and get the spaghetti and parmesan cheese for free” offers as well as the clever mix of dinner kits sold alongside cake mixes and other dessert options. Even if it’s not a healthy choice, nothing says “buy me now” like “buy one get three free” or “great value deal.” Grocery stores are also partnering with food brands in “trade spending” promotions to encourage purchases. For example, Kellogg’s recently ran a program that placed its boxes of cereal in the produce section. Genius!

Companies like Coca-Cola work feverously to determine the best ways to position their products even in the less-popular center aisles and work with stores on shelving arrangements and prominence. Clustering products is also aimed at getting your attention and money. This type of displaying may involve placing products commonly used by senior citizens or new moms in one convenient area. 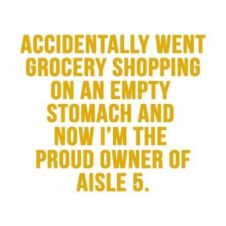 Americans spent about $150 on food per week and one in 10 say they spend more than $300. Millennials are a huge target audience for the food and grocery industry, as their average weekly food spending is more than that of older adults and their tastes tend to be more pricey and particular.

These young adults, my daughter included, spend most of their hard-earned money at the likes of Trader Joe’s, Whole Foods, Sprouts, and other natural food stores and they shop often as they prefer to buy only what they need and buy fresh. Your basic chains like HEB, Kroger, and Randall’s have had to keep up and have upped their organic and ethnic options but how they sell is becoming as important as what they sell.

When you think about it, the younger generation is all about their phones and healthy eating, so why not marry the two? She said yes in that many chains are now accepting Apple Pay and other mobile payment options. One service that is sure to boom allows shoppers to scan items with a mobile app as they shop and then pay through a self-checkout and maybe even through the app itself. Sold! 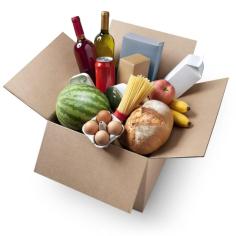 Online shopping, delivery services, and curb-side pickup are growing trends and everyone seems to be on board, with Amazon buying Whole Foods and Target buying Shipt. It’s no wonder, as online grocery spending is expected to reach 20 percent of the market and pass the $100 billion mark in the coming years. The $2.2 billion meal kits market, such as those offered by the likes of Plated and Blue Apron, is also expected to continue growing with some estimates projecting a 30 percent increase for the ready-to-make meals market that delivers to customers’ doorsteps.

Don’t count out your neighborhood grocers just yet though. They still have a firm grasp on the market and are primed to be not only your local food market, but special events locales as well. Dining areas and food courts, like those found in that spanking new HMart, are welcoming customers with events like coffee nights and wine tastings. Shoppers are encouraged to stop at various stations throughout the store to taste samples while listening to live music, resulting in their store being more inviting and a place where they can actually have fun.

Surprisingly I have yet to try any of the delivery, curbside, or meal kits options. Yes, I’m not a lover of grocery shopping but I’m also a bit OCD and like what I like. I find the idea of selecting items for someone else to purchase for me and then having to be home for the delivery as overwhelming and stressful and just doing it myself. For now I’ll just continue placing my reusable grocery bags onto a cart, checking things off my handwritten list (I still have not warmed up to any grocery list app), and hope I don’t forget anything.