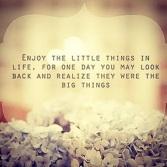 When I fly, I always like to pack a few snacks in my carry on. Grapes, cherry tomatoes, some kind of crunchy snack, and something sweet are my travel to go choices. This past week I included DOVE Promises, those little square pieces of chocolate that pack a punch. Much like Hershey’s Kisses, one or two Promises satisfy and gratify.  Each one also comes with a sweet quote inside their wrapper. The one I opened said “Don’t stop until you’re proud.” Snapple drinks do something similar under each cap, and that company brilliantly ties in the quote with their website.

You could say both of these are examples of how the little things in life can bring big chunks of joy. Bigger is not always better. Travelling along the eastern seaboard last week from Maryland to New Jersey I witnessed this geographically first hand. I found it fascinating that in 2.5 hours we drove through four states. In Texas, that wouldn’t get you from Austin to Dallas or Dallas to Houston. Everything is indeed bigger in Texas.

But back to the small things. There are so many small wonders in the world that we often don’t pay attention to. I’m thinking we should and what better time to start then now?

Take the Qtip. What would we do without them, right? This engineering feat was created in the 1920s for baby care and today more than 30 billion are sold each year. Each diameter of the cotton ends is the same for every single swab but they are not meant to be ear cleaners, even though 99 percent of us probably use them for just that. It’s worth noting that on every Qtip package is a warning against doing so. What else do we use these small wonders for? Applying make-up, stirring liquids, as fire starters with matches, and a host of other personal and ingenious uses. 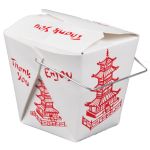 Then there’s the Chinese take-out box. The iconic white boxes seem pretty unassuming to look at, but they are actually amazing little pieces of design. They’re cut from one piece of paper and folded, leaving no seams where liquids can’t seep out of. And, if you pop the wire handle off, they turn into a plate. Who knew, right?!  What we do know is that this box style is now used for not only food, but for boxing gifts, party favors, and a whole lot more.

The boxes are somewhat surprisingly an American creation, patented in 1894 by Chicago inventor Frederick Weeks Wilcox. An, funny that the little works of origami often contain American food, as Chinese-American cuisine is very different from the food you find in China. So in essence, you have American food in an American box. USA! USA! 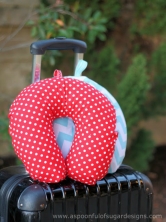 On my trip I also realized I’m also a big fan of that little thing called a travel neck pillow. Yes, I know they are a bit cumbersome to carry, but boy am I always so grateful I have one once onboard. Thank you to whoever invented them! And thank you to whoever invented the apple corer and slicer that gives you eight perfect slices of an apple. Mine is shaped like an apple and I couldn’t love it more.

And lastly, two items we all use and love but maybe don’t give enough credit to for making our lives just a little bit better: Post It Notes and beverage collars, those cardboard cup wraps that are used everywhere coffee is sold. 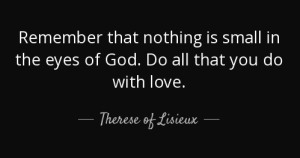 I write this during the week that the Feast of St. Therese was celebrated. Therese, for those who don’t know, was known for her “little way.” St. Therese of Lisieux was a French Carmelite nun who died at the age of 24 in 1897 but her little life changed people in big ways and still does to this day. Therese believed that he actions were ways to let God’s love work through her towards others, regardless of how big or small they were. This philosophy is known as the Little Way and is about doing the smallest actions with big love. Therese lived a simple, hidden life of holiness and didn’t chase lofty achievements or merits. She even wrote about how much care she put into folding napkins at the dinner table.

St. Therese is one of my favorite saints and if I can employ her “little way” in even the littlest ways I’d be big-time happy.