This writer of “I Am Woman, I’m a Wordsmith” blog cannot go another day without paying tribute to three remarkable women who passed away last week.   Although Lilly Pulitzer, Margaret Thatcher, and  Annette Funicello had little in common, they did share individuality, determination, and talent.  I admired all three of them for various reasons and hope that by reading today’s blog, you too will give them the credit they are each due.

Best known for her colorful and playful dresses for the country club set, Lilly Pulitzer ‘s story began with a juice stand.  Her husband, Pete Pulitzer, was the grandson of newspaper publisher Joseph Pulitzer, whose donation to Columbia University established the Pulitzer Prize, the written word’s “Oscar.”  Born in New York, Pulitzer found herself living the social life in Palm Beach, where the family owned citrus groves.  After a doctor told her she “needed to go out and find something to do with her life,” following a nervous breakdown, Lilly opened a simple orange juice stand on her family’s property.   The hands-on worker often found her dresses stained with juice splatters, but instead of wearing an apron, she asked her seamstress to make fresh dresses out of colorful and playful fabrics.  These tropical outfits became a fashion sensation in the 1960s and were favored by the likes of Jacqueline Kennedy, who wore one of her former boarding school friend’s colorful shifts for a “Life” magazine spread.

Soon a string of Lilly Pulitzer boutiques could be found nationwide, boasting the colors of a Florida vacation on everything from dresses to swimwear to home décor to children’s clothing.   Times got tough in the ’80s however, and Lilly filed for bankruptcy.  The label was revived some 10 years later and today the brand is worth nearly $30 million.

Lilly herself had retired from the day-to-day operations of the company in 1993, but following her own doctor’s orders, she continued to open a store for a friend who “needed something to do.”  It wall all about fun and all about life.

“I entered in with no business sense,” she told the Associated Press.  “It was a total change of life for me but it made people happy and being happy never goes out of style.”

Pulitzer died on April 7 at the age of 81, probably wearing something tropical and fun. 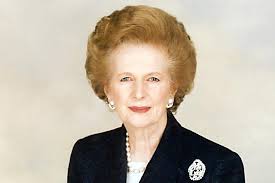 Margaret Hilda Roberts was born in central England in 1925 and went on to become one of the greatest world leaders of our time.  In 1951 she married Denis Thatcher, later had twin boys, and forever lived the values of hard work and thrift that her grocer father instilled in her.  Along the way she attended Oxford University, earning a science degree, and worked as a research chemist before being elected to the British Parliament and serving as the nation’s Education Secretary.

It was in 1979, however, with her first of three election victories as British Prime Minister, that history was written by Europe’s first female prime minister.  During her 11 years as England’s vocal and resilient leader, Thatcher turned her beloved country into a free market masterpiece; transferring huge chunks of the then bruised economy out of the government’s hands and putting it into the hands of the private sector.   Perhaps most famously, Thatcher, working closely with President Ronald Reagan, fought global communism and saw the fruits of her labor materialize with the fall of the Soviet bloc and the Berlin Wall, resulting in perhaps her most famous quote, “The problem with socialism is that eventually you run out of other people’s money.”

Dubbed “The Iron Lady” by the Soviet press, Thatcher embraced her role and is trumped only by Winston Churchill as Britain’s most revered head of state.   She was virtually unstoppable as she sold British landmark state-owned companies that were losing money, such as Jaguar and British Airways, and rejoiced as they and other national entities eventually became profitable.   British living standards under her leadership also rose dramatically, and even detractors such as liberal commentator Peter Jenkins said Thatcher had “changed the political map and put her country on its feet again.”

He wasn’t the only one who admired Thatcher’s courage and grit.  Former British Prime Minister Tony Blair, a member of the opposing Labour Party, said of his predecessor, “Very few leaders get to change not only the political landscape of their country but of the world.  Margaret Thatcher was such a leader.”  Thatcher’s influence was so great that even Blair’s  once socialist Labour party endorsed many of Thatcher’s more democratic policies.

Thatcher’s undying support of the U.S. and Reagan, never faltered.  She was also one of the first world leaders to consider Mikhail Gorbachev as a promising leader.  Years later the two sat next to each other at Reagan’s funeral.

Formally named a Baroness in 1992, Thatcher died peacefully in her sleep on April 8.  A fitting end to someone who worked to bring peace to the world.

I grew up loving all those Disney beach movies starring Annette Funicello and Frankie Avalon. They were fun and they were innocent, a concept movies today have no concept of.   I adored them; everyone did.  That’s why the world is a little sadder after hearing about Funicello’s death on April 8.

The beach movies are what I remember, but they aren’t what made her initially famous.  Funicello was just 13-years-old when Walt Disney himself chose her to be one of the original Mousketeers on “The Mickey Mouse Club” hit tv series.  Shown in reruns for years to come, the program quickly made sweet Funicello a star and the unquestionable most popular Mouseketeer ever.  She remained a Disney “princess” for years, starring in many popular 1960 beach movies with Avalon.  “Beach Blanket Bingo” was my favorite and I will always remember the one-piece swimsuits she demanded to wear rather than the new bikinis.  Perhaps most impressive is the fact that, unlike so many of today’s child stars, Annette Funicello lived a life as clean as the one she portrayed in movies and was a positive influence for many.

She had a “jubilant personality and endless talent.  Annette was as well-known for being as beautiful inside as she was on the outside and she faced her physical challenges with dignity, bravery, and grace,” said Disney Chair and CEO Bob Iger upon hearing of her passing.

Funicello was diagnosed with multiple sclerosis in 1987 and ultimately died of complications from the degenerative neurological disease.  She battled the disease for 25 years and her legacy will continue with the Annette Funicello Research Fund for Neurological Diseases, which she established in 1992.

Born in small-town Utica, New York, Funicello brought her vibrant personality and small-town roots with her to Hollywood.  She left as a one-of-a-kind pillar of strength and goodness.

Perhaps Annette said it best herself when she said, “Life does not have to be perfect to be wonderful.”

Here’s to three wonderful women who left a mark on the world and will forever be remembered for their efforts.