“Pick color.” I’m sure most of you are familiar with that statement, as it’s usually the first thing you hear when entering a nail salon. They are popular, and they are everywhere. Check out any strip center, mall, hotel, or spa and you’ll find a row of comfy chairs just waiting for you to sit in and get a pedicure or manicure. I was blessed with good, strong fingernails so I rarely get manicures, although I have recently the discovered the long-lasting joy of shellacked nails. I do, however, love a good pedicure. I am not alone. According to “Women’s Wear Daily,” American women spent $768 million dollars on nail polish in 2012. That’s a lot of OPI, Sally Hansen, and Esse! 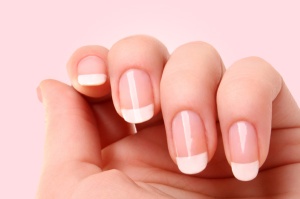 I recently saw a print ad for Orly nail polish claiming its creator, Jeff Pink, also created the French manicure. It made me curious so I did some research, and yes, the famous white-tipped nails are actually American-born, not French! Who knew?!

Pink, who worked as a Hollywood make-up artist in the ‘70s, came up with the now popular style of nails because it worked well with a wide variety of stars’ wardrobes. He took the look to Paris runways and it quickly became the in-demand look of models and designers. He continues to influence the beauty industry with his innovative designs and products, as well as his color expertise, and even Kate Middleton donned a French manicure on her wedding day.

“Once I started having the movie star stylists paint the nails with a white tip and a sheer, the celebrities loved it,” he writes on his website. “I realized the most elegant, universal nail look is a natural nail look.”

Someone who might disagree with Pink, however, is Sophy Robson, whose fingernail art is in hot demand and is known for raising eyebrows and pushing boundaries. One of the first to embrace blogging, British-born Robson began posting images of her creations and was quickly embraced by the rich, the famous, and everyone in between. Her graphically-designed glossy embellishments are known to include flashy items such as zippers, animal prints, and gems. She’s also made fingernails fashion items by featuring the designer logos of Dior, Chanel, Louis Vuitton, Hermes and others on her clients’ nail beds.  One of her most popular ideas, however, might be her take on Pink’s French manicure, in which she incorporated a new twist by using colorful hues instead of the standard white on the tips. 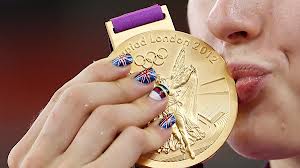 Robson considers herself an artist, albeit a nail artist, and was recently featured in London’s first ever nail-art exhibit entitled “Nailphilia.” Her work has also been prominently displayed in music videos such as Alicia Keys’ “Girl on Fire” and in ad campaigns for Tom Ford and Jimmy Choo. It was previously unknown athletes, however, that perhaps put her on the pop culture map. In 2012, Olympic athletes from all over the world donned her creations, most notably the flags of many countries. I remember admiring the little works of art, and I bet many of you do too. They, along with Gabby Douglas and Ryan Lochte, were the talk of the games.

So what is it about painted nails that have struck such a cord? It is a multi-million dollar industry that employs thousands.  Everywhere you look women are sporting different looks and lengths, and “Martinis and Manicures” nights are popular outings in small towns and big cities alike. Personally, I prefer a classic French manicure but I am loving the hot “mixed manicure” trend of painting ring finger nails a slight variation of the color worn on all other eight nails.  I’m also all about glitter nails but I’m not a big fan of another current trend:  super-long, extra-pointy nails.  If you’re on Pinterest, you know what I’m talking about. Here are just a few examples of what’s out there:

Whether long or short, simple or flamboyant, your nails make a definitive statement about who you are and what you like. If nothing else, maybe it all comes down to feeling pampered and getting groomed. The word manicure actually comes from the Latin words “manus” and “cura,” meaning “hand” and “care.” So the next time you’re asked to “pick color,” have fun and be creative. Those 10 little nails may very well make a big statement!