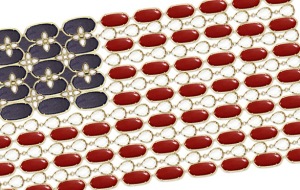 Tomorrow the stars and stripes will be proudly flying across America, but do you know how to properly hang your flag?  The U.S. Flag Code, which formalizes and unifies the traditional ways in which we give respect to our nation’s flag, also contains specific instructions on how the flag is not to be used. They include:

When the flag is displayed from a staff (pole) projecting from a window, balcony, or building, the union (stars area) should be at the top of the staff unless the flag is at half staff.

When displaying the flag against a wall whether vertically or horizontally, the flag’s union should be at the top, to the flag’s own right and the observer’s left.

When the flag is displayed over a street, it should be hung vertically, with the union to the north or east.

When flown with flags of states, communities, or societies on separate flag poles that are of the same height and in a straight line, the flag of the United States is always placed in the position of honor – to its own right.  The other flags may be smaller but none may be larger.  No other flag ever should be placed above the American flag.

When flown with the national banner of other countries, each flag must be displayed from a separate pole of the same height and flag should be the same size.

So now that you know how to properly display a U.S. flag, it’s time to consider where you actually purchase it.  Sadly, in 2011 $3.6 million worth of American flags were imported from other countries, with the vast majority ($3.3 million) coming from China.  Although that amount is a small percentage of the $55 million in total annual sales of made in the good ole’ U.S.A. flags, maybe it’s time to make sure your American flag was made in…America!  There’s no better place to start then Annin & Co.

The world’s largest and oldest flag company, Annin & Co. and its 500 employees produce 15 million U.S. flags a year. All are made in plants located in New Jersey, Virginia, and Ohio.  They are literally “Made in the U.S.A.” and have been for nearly 160 years.

Perhaps most impressive is the fact that some of the flags are still hand-made and hand-sewn.  Seamstresses carefully sew together stars and stripes, while highly trained embroiderers create meticulously detailed flags with foot-operated sewing machines.  Training an embroiderer can take up to four years!

The company’s roots go back to 1820, when Alexander Annin opened a small flag-making shop in New York City. Annin’s sons, Edward and Benjamin, followed in their father’s footsteps and in 1847 founded Annin & Co., moving to a large full-service factory on New York’s Fifth Avenue.

Today Annin makes 30 million flags of all kinds each year. The company has made state flags that fly over every state capitol and American flags manufactured by Annin have flown at both the North and South Poles, on Mt. Everest, in the rubble at the World Trade Center on September 11, and one remarkably draped Abe Lincoln’s coffin.   It was an Annin-made flag that Marines raised atop Mount Suribachi on Iwo Jima in 1945, memorialized in a classic Associated Press photograph and  on July 20, 1969, Neil Armstrong and “Buzz” Aldrin stepped out from the Lunar Module and planted an Annin-made U.S. flag on the moon’s surface, where it remains today.  The world’s largest American flag—104 feet by 235 feet—was made by Annin for the J.L. Hudson Co. in Detroit in 1949 and was retired in 1976.  It can today be found in the Smithsonian Institute.

As Deacon Pete said in church this morning, those ordinary red, white, and blue fabric pieces are anything but ordinary.  Together they make up the star spangled banner, which represents the land of the free and the home of the brave.  They represent us.