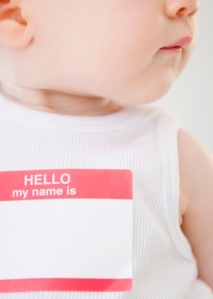 While perhaps not literally scripture today and actually a little “off” spiritual-wise, today’s blog nonetheless has to do with the bible. In an unusual way.

It may have all started with Apple and recently concluded with North. What am I talking about? Baby names, of course! You know, those things that can often instantly denote the age of someone. Linda and Raymond? Probably in their 50’s. Jessica or Matthew? In their 30’s. Megan and Dylan? In college right now. Dakota and Dakota? High school or even younger and a boy or a girl.

All well and good, but according to BabyNames.net, 2014 will be the year of a return to traditional bible names for newborn babies. Yep, make way for little Caleb, Levi, Luke, Naomi, Shiloh, and Judith to join the ranks of already popular Jacob, Noah and Hannah. I love it!

Maybe moms and dads just like the sound of these bible-based names, but hopefully they’re also considering the meanings behind them. Naomi stands for “being pleasant and congenial,” Levi represents not jeans, but “connected” and Caleb means“to be faithful?”

After years of experimenting with unisex names like Logan and Presley and the filling of classrooms everywhere with surnamed kiddos like Jackson and Wyatt, it’s somewhat refreshing to learn the big book is predicted to be the go to source for names this year. Parents may still do their own thing however, with eccentric spellings also predicted to be in vogue.

Not content with just unique names, parents today are also choosing unique spellings for their offspring. Isaac becomes Izak, Michael becomes Mykal, Cooper becomes Kooper, and Brooklyn becomes BrookeLynn. When I see these types of names I always think of my sister Coral who, after years of being “Cora,” “Carol,” and a host of other misspellings of her beautiful name, chose to name her two sons Michael and Andrew. If her name wasn’t going to be spelled right, she made darn sure her boys’ names would be!

Another baby name trend lurking in 2014 are names from mythology like Tristan, Damon, Thor, Gaia, and even Luna…my maiden name! Oh yes, that’s another 2014 trend: Hispanic names in non-Hispanic families. Here’s to all the Maria Johnsons and Julian Smiths of the world!

And finally, even though we seem to be somewhat weary of the above mentioned celebrity kid names (Apple and North), popular culture is still predicted to reign supreme in nurseries all over America. Look for a lot of kids named Hayley and Camille after characters in “The Originals,” Piper from “Orange is the New Black,” Katrina from “Sleepy Hollow,” “Rayna” from Nashville, and even a return to Abbey thanks to “Downton Abbey’s” popularity.  One more name trend lurking:  that of of Olympic athletes.

What would I name a baby if I had one this year? I like the idea of using Luna for a girl or maybe even Windsor and I could call her Winnie (I love the Royal Family and Winnie the Pooh!) and a boy would be either Nicholas or Matthew. What about you? What names do you love? What name would you change yours too if you could?  Do I hear an “amen” to biblical names?