Ireland.  The land of leprechauns, Catholics and Protestants, U2, fabulous golf courses, and St. Patrick.  The latter of whom we celebrate today, but who was St. Patrick and why do we celebrate him in such a big way?

St. Patrick is one of the world’s most popular saints and is usually associated with Ireland but he was actually born in Scotland!  Also somewhat surprising is that we celebrate St. Patrick’s Day on the day he died, March 17, 461.

There are many legends and stories of St. Patrick, but this is his story. 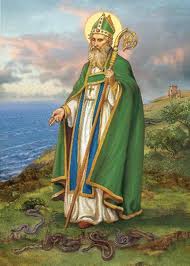 As a boy of 14 or so, he was captured and taken to Ireland as a slave to herd and tend sheep.  During his captivity, he turned to God in prayer. His captivity lasted until he was 20, when he escaped after having a dream in which he was told by God to leave Ireland by going to the coast. There he found some sailors who took him back to Britain, where he reunited with his family.

He had another dream in which the people of Ireland were calling out to him “to come and walk among us once more.”   He returned and was eventually ordained a bishop and was sent to take the Gospel to Ireland. He began preaching the Gospel throughout Ireland, converting many and began building churches all over the country. Kings, their families, and entire kingdoms converted to Christianity when hearing Patrick’s message.

During his travels, Patrick used the shamrock as a way to teach the trinity.  The simple green plant grows abundantly in Ireland so he cleverly used it to explain that the trinity – the Father, Son, and Holy Spirit – although three separate entities are really just one, much like the three parts of the one plant that is a shamrock.   His idea was so convincing that even pagan rulers quickly converted to Christianity.

The Greening of a Holiday

St. Patrick’s Day originated as a somewhat political holiday rather than a religious one.  In the mid-19th century, Irish immigrants faced discrimination comparable to what African Americans encountered, sometimes even worse.  In a show of solidarity, Irish American immigrants organized themselves and commemorated St. Patrick’s Day with annual parades and festivities to demonstrate their political and social might.

Irish law from 1903-1970 considered St. Patrick’s Day a religious holiday, requiring all pubs closed for the day.  This means drinking was not a part of original celebrations!  The law was reclassified as a national holiday in 1970, opening the doors of drinking establishments and the tradition of green beer.  However, in the diocese of Ireland, it is still considered a holy day of obligation, meaning Catholics are obligated to attend mass and receive the sacrament on that day…perhaps before visiting the local pub!

Today it’s said there are more Irish people in the U.S. than there are in Ireland!  Well, sort of.  There are an estimated 34 million Americans who claim Irish ancestry, but the population of Ireland is only 4.2 million.

St. Patrick, along with St. Nicholas and St. Valentine, is one of Christianity’s most widely known figures, but he is also recognized in the secular world.  He is not only revered by Catholics though.  He is honored with a feast day in the Episcopal Church and is also venerated by the Orthodox Church.

Patrick was a humble, pious, gentle man, whose love and total devotion to and trust in God should be a shining example to each of us. He feared nothing, not even death, so complete was his trust in God, and of the importance of his mission.

He is said to be buried on Down Cathedral in the County of Down in Ireland.