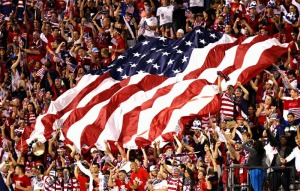 Today’s the day. The day when much of America will stand still at around 3 p.m. CST. That’s when our newly beloved U.S. soccer team will take on their counterparts from Belgium in a win or go home World Cup match.

Never in a gazillion years did I ever think I’d be watching, much less writing about, soccer. I remember watching endless matches of my two nephews but the soccer bug just never bit me. Not even during the World Cup four years ago. Yes, every Olympics I’m there rooting for the U.S.A. but for some reason this year’s World Cup is different. I love seeing the throngs of people gathering in cities across America and I love watching all the YouTube videos.

Yes, I may not be a tried and true soccer fan, but I am a sports fan and I am an American fan. That’s why I’ll be sitting on the edge of my living room seat during today’s game and that’s why I find a new Pew Research Poll appalling.

Not Proud to Be American?!
How can the same country that is boasting more fans in Brazil than any other country have so many citizens who say they aren’t proud to be American? That’s the results of the exhaustive poll, in which an amazing 44 percent of all respondents said they didn’t often feel proud to be American. Ouch.

Here’s how it all came down. Pew divided their samples into right-wing/left-wing categories and when asked if they “often feel proud to be American,” 60 percent of liberals said no while 80 percent of conservatives said yes. I find this shocking, alarming, and actually quite puzzling.

It all brought to mind Michelle Obama proclaiming back in 2008 that “For the first time is my adult lifetime, I’m really proud of my country.” Really? You weren’t proud when we landed on the moon, when we won the “Miracle on Ice,” or when Sandra Day O’Connor became the first ever female Supreme Court Justice? Double ouch.

What do these people want? They have the White House and the Senate. They got their nationalized health care, gay marriage is being ratified state-by-state, and legalized pot is more and more popular in places besides Colorado. The southern border is virtually open and the national media is firmly planted on their side. What’s scary is that experts says these disgruntled Americans aren’t moving to countries they could maybe be proud of, but instead are hurting America even more by being less willing to do the hard work necessary to make things better. I don’t get it. You think they’d be so thrilled with the state of our country and that conservatives would be the ones upset. Go figure.

I will admit I’m not always proud of  America, but I am always proud to be  American. In a matter of hours I will be chanting “I believe that we will win” and screaming “U.S.A., U.S.A.” as our boys take on Belgium. Win or lose, I will be proud to be an American.