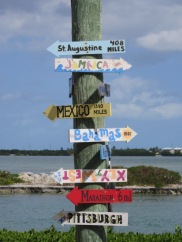 A crisis has happened in my life.  No, it’s not a crisis in the real sense, but to me, it’s still a crisis.  I’ve become a person who finds it hard to make a decision.  I don’t know why and I don’t know what’s caused it, but I have decided it’s driving me crazy!

My husband says I over-analyze things waaaaaay too much.  Yes, I do, but is that a bad thing?  Maybe not if the decision is a big one like selling our house or changing jobs, but deciding whether to sign up to volunteer somewhere for four hours or stay home to putter and read probably should be made much easier than I’ve been finding it to be.  This makes it look pretty black and white, but it’s not always the case: 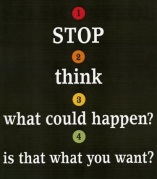 I am committed to improving my ability to make choices, if for no other reason than the fact that it’s been proven that making and sticking to a decision is an actual source of happiness.   I learned that in the July chapter of “The Happiness Project” and it really made me think.   At this point, just making a decision and not lamenting over it would make me happy!

One positive step I’ve made toward doing this is eliminating all the “shoulds” from my life.  I should do this, I should like that, I should stop something.  Nope, no more shoulds for me.  Should has officially been replaced by “want” or “need.”  End of story.  It’s been decided. 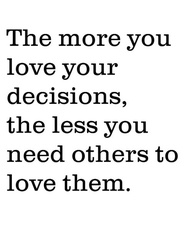 I’m pretty sure one of the biggest obstacles in my inability to make a decision is my fear of regret.  I’m so afraid of making a decision I’ll later regret.  Big or small.  I’ll find a way of seeing the grass could have been greener or even worse, should have been greener.   “I should have just stayed home and read my book.”  “I sure wish I had gone with my friends instead of just staying home reading my book.”  I guess, in a sense, I want to do it all…but I can’t, and neither can you.

We have all made decisions we later regret.  Some of them have been life-altering, some just lead to undesirable results.   In researching this topic, I discovered that making sound decisions is not necessarily something that comes naturally to us.  In fact, doing so is considered a skill that needs to be developed.   Great.  Now I get to learn something else.

So, learn I will. 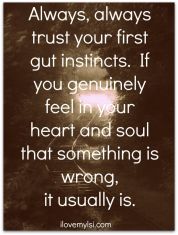 Surprisingly, many experts agree that going with your gut instinct is often a safe bet.  You will, of course, want to take into consideration many factors when deciding yay or nay, which may include all or some of the following:

Data.  Basically this is the “give me the facts” stage.  Statistics weigh heavily here, but keep in mind that basing decisions solely on data are often flawed.

Information.  This is a collection of the data but with meaning and context added.

Knowledge.  Information, but information that is refined by analysis and is tested and verified.

Decisions made at the gut level may be either easy or quick to arrive at, but they come with greater risk than those made analyzing data and information.  You also want to factor in any and all sources of information.  Are those sources credible, reliable, and without bias?  If not, find other sources.

“Don’t let other people make your choices for you because you are the one who will be accountable for them I the end.”  Joyce Meyer

I’m not one to ask people’s opinion when grappling with a decision, but seeking input from friends, family members, and co-workers can prove beneficial to many.  Don’t ask too many people, though, as sheer volume of opinion will just lead to more confusion on your part.  Stick to trust sources and rely on the quality over quantity equation.  In the end though, go with your decision.

It is said that nothing will test someone’s ability to lead more than their ability to make decisions.  In fact, a Forbes magazine article that I sourced for this blog states that you cannot separate leadership from decision making and that the two are inexorably linked.   Sadly, it usually takes years of solid decision making to elevate your position, but it only takes one bad decision to lead to your demise.

Also recommended in the “make a decision” process is to always have a back-up plan.  I also like the idea of incorporating a choice that goes against everything you normally would consider.  Lifehacker.com says doing the exact opposite is sometimes the best way around a decision-making impasse.   Step outside of your comfort zone.  Rattle things up.   Throw in an option that is essentially the opposite of what you’d normally do.  Chances are you won’t go with that choice, but having to consider it may just make the other choices much easier to pick.

Another idea is to pretend you’re advising a friend on making the very decision you’re contemplating.  Sometimes our emotions make it difficult to make a decision, but helping a colleague do the same may seem less intimidating.

I like to use is the “pros and cons” method.  You know the drill, on one side I list all the pros of said decision, and on the other side I list all the cons.  This will normally paint a pretty fair picture of what you’re analyzing and has helped me many times.

Okay, maybe that’s what I should start doing…flip and coin and go with it.  Yeah, right.   I’ve decided the mere thought of that scares me to death!  Maybe I’m too much of a planner.  Maybe I worry way too much.  Maybe I’m not trusting enough.  Maybe, as my husband says, I JUST OVERANALYZE TOO MUCH!!!!

In the end, probably the only question that should be asked when making a decision is “Is it the right thing to do?”  If the answer is no, your decision has been made.