“I know, let’s combine Cream of Mushroom soup, dried up onion rings, and green beans and call it a Thanksgiving tradition!” What in the world and who in the world?! Yes, I’m about to reveal the mystery of the green bean casserole.

You all know what I’m talking about: that once-a-year vegetable dish using the three ingredients named above. I tried it for a couple of years but couldn’t sink my teeth into it…literally and figuratively. Separately I like all three ingredients but together just didn’t work for me. I wanted to love it, but I just don’t. Like it, yes. Love it and want it, no.  I’m back to fresh green beans broiled with red bell peppers and garlic. But…just because I don’t care for the casserole doesn’t mean I’m not curious about it.

The love-to-hate dish has actually graced Thanksgiving tables since the 1950s according to the History channel.  It all began in a test kitchen at the Campbell Soup Company’s New Jersey headquarters. That’s where, in 1955, Dorcas Reilly concocted the idea pretty much on a whim. Reilly worked in the company’s Home Economics Department and says she doesn’t even remember how she came up with the idea of uniting the three ingredients into what has become one holiday classic.

The recipe was instantly popular and Campbell’s gave it away on recipe pamphlets. It was simple in that it required ingredients most homes always had on hand, it could be made a day ahead and reheated, and it was a vegetable. Today Campbell’s estimates 40 percent of their Cream of Mushroom soup sold in the U.S. goes into making the infamous green bean casserole. Reilly was honored for her idea in 2002 and presented the original recipe card to the National Inventors Hall of Fame in Akron, Ohio.

Who knew? Now you do! 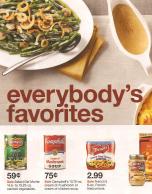 Bake at 350° for 25 minutes or until bean mixture is hot and bubbling.

Bake for 5 additional minutes or until the onions are golden brown.