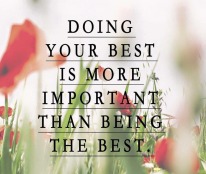 Tis the season for graduations. All over my Facebook page are photos of high school graduates, full of joy and full of promise. If you are one of those graduates but you weren’t valedictorian or top 10 percent, no worries. According to a new study you, the average student, may make a bigger difference in the world than those whose grades and scores were better than yours. Apparently doing your best is indeed more powerful than being the best.

The study, conducted by Boston University researcher Eric Barker, did find that valedictorians and salutatorians do traditionally achieve adult success and land top-tier jobs, but they don’t, as he calls it, “change the world, run the world, or impress the world.”

“The difference between a successful person and others is not a lack of knowledge, but rather a lack of will.”

Ironically. BU is one of many universities whose admission policies favor the very students that a study they conducted says don’t automatically transfer their classroom success to boardroom success.

But, don’t get your diplomas and cords in a wad, the study didn’t conclude class rankers lack success, it concluded that they tend to equalize among those who finished in the middle and bottom of their class rankings once they hit the workplace pavement.

They also may not be millionaires. In yet another research project, 700 millionaires were studied and it was discovered that their average GPA was 2.9.

That’s one of my daughter’s favorite quotes, and Barker would agree. In his book “Barking Up the Wrong Tree” he concludes that kids who aren’t the smartest but focus and try hard are the ones who shake things up. They know the value of hard work, have faced challenges, and don’t feel entitled to anything. Things didn’t come easy for them so once they hit the real world, they seem to better adapt to and accept adversity and criticism. Makes perfect sense to me.

When Barker spoke with Business Insider, he explained the reasoning.

Number one he says, comformity is rewarded in high school as is the willingness to go along with whatever the system suggests. High achieving students are smart and smart enough to figure out just what teachers want and how to deliver those wants consistently. But, this is of no benefit to them after graduation because, as Barker explains, “In school, rules are very clear. In life, rules are not so clear.”

Rules do exist, but once employed, the valedictorian types tend to be employees who become the system but don’t change or improve it. They are great at following and implementing rules, but once the tried and true is not benefiting the company, they aren’t comfortable with thinking out of the box.

The other things schools tend to reward is being a generalist and knowing a little about everything. Not gonna happen in your job, where you will be expected to be an expert in the field, not someone who dabbles in math, science, and philosophy.

This all goes along with a blog I wrote recently for a client in which I referenced that very quote. Skills, you can train. Passion, you cannot.

You also can’t train accepting the cards you’ve been dealt. Attention the one-third of Millennials who say safe spaces on campuses are “absolutely necessary.” Reality check young coeds, life does not have a safe space.

It seems we are in the midst of raising a soft generation and one that is becoming increasingly ill-prepared for the real world. Would I hire one of those Notre Dame graduation walk-outs? Probably not. Whine away snowflakes, just not at my company.

It’s time the youth of today stop thinking about themselves so much, and instead think of others. Focus more on what’s right rather than on your rights. You have the right to be a good person so maybe consider how your intellectual talents can help a fellow student rather than your GPA. Do you have a musical gift? Go play or sing at a nursing home or hospital rather than practicing your craft alone in your room or music hall. It’s called empathy and it’s what makes a difference in the world we all live in.

Maybe it goes back to the fact that kids are not told “no” anymore. They’re given choices for everything and their every need is catered to. There is no positive pay-off for this and the result is more likely someone who is not motivated or resourceful rather than one who is grateful and ambitious. Put your CEO cap on. Which one would you hire?

And they need to know, “No, we can’t afford that.”

They may hem and haw at first, but they will most likely grow up being resourceful and great problem solvers.

We praise the younger generation too much and we protect them too much. Trophies are still awarded for mere participation and kids are told they can do anything and do it all. No they can’t. Not all kids can make the team or be in the band. Every student will not go to college, and that’s okay. Society needs them and the trades they’ll learn. It’s important to let our little ones fail throughout their growing up years, which will help them learn determination, responsibility, and accountability.

Billionaire CEO Marcus Lemonis says graduates also need to “get a job” and not live with their parents. Yes, there are always exceptions to the moving back home dilemma, but they should be considered last resorts.

Lemonis, CEO of “Camping World” and star of “The Profit,” says every college graduate needs to get a job, any job, and do their own laundry, cook their own food, and pay their own bills. This, he says, will help them find a career path and shape their work ethic. Those are the kids he would hire and those are the kids we should be raising. Not those who have everything they want and need a safe space to go to.

Am I saying never help your children, especially in times of trouble? No.

Should we sit back if our kids fail at the “big stuff” and watch them suffer? Absolutely not.

Do we still help our grown daughter? Yes, but the minute we feel she’s not working hard or feeling entitled, all bets are off.