Happy “Year of the Dog!” In my world, every year is a year of the dog but now it’s official. Yesterday was the Chinese New Year, which rang in the Year of the Dog. This dog lover couldn’t be happier.

Truth be told, it’s not really a year to celebrate pets or man’s best friend, it’s actually the beginning of the Chinese New Year. Each Chinese New Year brings with it an animal for that year and celebrations are held for two weeks or more. According to Asian astrology, your birth year and the animal it represents determines your personality traits. On last year’s Chinese New Year I had a dinner party and collected my friends’ traits according to their year of birth. It was so much fun!

As for years of dogs, there are actually five types for different Chinese New Years, with 2018 being the Earth Dog. Anyone born in an Earth Dog year is predicted to be communicative, serious, determined, and responsible. A few famous people who were born in a Year of the Dog are Winston Churchill, Mother Teresa, Elvis Presley, and President Trump. 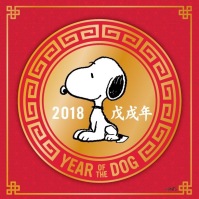 This year is the first Earth Day year since 1958 but someone born in any dog year is said to be sincere, honest, and loyal. They rarely abandon family, friends, or workplaces; are good at helping others; but may be a bit worried and anxious inside. Hmmmm…sounds a lot like actual dogs, right?

Still not convinced? Here’s a test: put your dog and your wife/husband in the trunk of your car, return, and see which one is happy to see you. Pretty sure it will be the one with a tail.

Dogs are amazing animals. Here are just a few fun facts about my favorite four-legged animals:

We are all still reeling from the horrific school shooting in Florida last Wednesday and the arguments over gun control and mental health care are in full force, but perhaps an Ohio high school and a Houston non-profit have a partial solution. The two are participating in programs aimed at improving school safety by “employing” dogs that can detect guns and drugs in classrooms, hallways, and parking lots. Granted, this may not have stopped the Valentine’s Day shooting, but many experts say just knowing there are enforcements and measures in place to stop crime is sometimes enough to deter it.

Two other very interesting programs are an innovative one that pairs dogs with anxious witnesses called to testify in court hearings and trials and another one that provides service dogs in a school for students on the autism spectrum or have mood or neurological disorders or ADHD. These dogs can tell right away if someone is nervous and are trained to calm those nerves. It’s truly miraculous and I’ve seen it firsthand.

“There is no psychiatrist in the world like a puppy licking your face.” Ben Williams

As a supporter of and volunteer at The Dog Alliance, I’ve seen autistic kids relax during learning activities simply by having a dog nearby to pet and I’ve witnessed veterans suffering from PTSD do the same through the fabulous “Hounds for Heroes” program.

These types of therapy and service dogs are nothing new. Seeing eye dogs have been around forever, firefighters once used Dalmatians to protect their trucks and “sound” an alarm, and police officers still use dogs in a variety of ways.  A dog’s ability to either engage a person or relax one also makes them perfect for disaster relief and servicemen and women are uniquely attached to their “war dogs.” Even Florence Nightingale recommended small pets for the chronically ill.

What is new is the plethora of service, therapy, and emotional support dogs…and make no mistake they are all different.

Service animals are not considered pets,  are legally defined by the Americans With Disabilities Act, and are trained to meet the disability-related needs of their handlers who have disabilities. Federal laws protect the rights of these individuals in public places. Think seeing-eye dogs, guide dogs, and any dog that is trained to do work or perform tasks for their owner.

Therapy animals are not legally defined by federal law but some states have laws describing them. Usually they are the personal pets of their handlers and work with volunteers to provide therapeutic benefits in a variety of settings. They are usually not service animals but sometimes have dual roles as both. Think dogs in libraries, hospitals, and nursing homes.

In general, emotional support animals have no legal definition, are considered pets, and are not protected under the ADA.

All of these dogs love their owners and more than likely possess the attributes associated with someone born during this current Year of the Dog. When it all comes down to it, it’s really all about love, loyalty, and helping others. In this dog eat dog world, here’s hoping the Year of the Dog brings more of all of those to each of us.