Filed under: Uncategorized — carlawordsmithblog @ 1:57 am

Anyone who knows me knows I’m obsessed with British royalty…particularly Princess Diana. My daughter of course knows this and said she loves me more than I love Princess Di on her Mother’s Day social media post. My friend Shirley knows this; she sent me a Meghan and Harry tea cup for my birthday. Considering this, you can imagine how excited I am about this Saturday’s Royal Wedding. So excited, that some girlfriends and I are having a sleepover Friday night and waking up bright and early to watch the festivities live in our jammies with jam and scones.

Quick backstory. One of the ladies and I have a sad royal connection. I was at her house the night Diana died in that tragic car crash in Paris. I will never, ever forget where I was and as fate would have it, she’s hosting the slumber party. We’ve all known each other for more years than I care to say and have all written for a living at one time or another, so one of them shared a funny video of British talk show hosts making fun of American English.

Jokes were on us as they made fun of Americans complicating English, claiming we have changed it to help us “understand it better.” They also teased us for needing a bit more explanation than Brits do. We’ve made a simple “bin” a “waste paper basket,” “horse riding” “horseback riding,” “squash” “racquet ball,” and “glasses” “eye glasses.” Funny blokes, right?

There’s an old saying that America and Britain are two great countries divided by a common language and if you ask a Brit’s opinion, they’ll likely say “You don’t speak English, you speak American.” Off with their heads!

But, with American Meghan Marckle marrying Prince Harry this Saturday, I thought it’d be fun to take a look at the two countries and their versions of the same language. First though, can we just talk about a British accent?

I die. I die to hear someone speak with a British accent. They could tell me to F off and I’d probably say “thank you.” It is so proper. So pure. So aristocratic and Downton Abbeyish. I love how they say “nay-buh” not neigh-brrrr and “gare-raj” not “guh-raj.” On the “Real Housewives of Beverly Hills,” Lisa Vanderpump can say the exact same thing in her British accent that American Lisa Rinna says but it will feel oh-so different.

Let’s first get something else out of the way: the difference between England, Great Britain, and the United Kingdom. In short, England is a country, this we know. Great Britain consists of the countries England, Scotland, and Wales and is merely a geographical term regarding the land mass those three encompass.

The United Kingdom is what we Americans might call the “big dog” and its full name is United Kingdom of Great Britain and Northern Ireland. It consists of all of Great Britain plus Northern Ireland and it is a sovereign state represented by one central government. The four are considered separate in the minds of locals and sporting events, but all powers come from the UK. It’s kinda like the 50 states being separate states but “ruled” by a nation of laws. They all have their own flags, and did you know Britain’s “Union Jack” combines aspects of all three? It consists of the red cross of England’s Saint George, the white saltire diagonal cross of Scotland’s Saint Andrew, and the red saltire of Ireland’s beloved Saint Patrick.

To be sure and as is the case in the U.S., there are many different English accents in the U.K. Comparing an Irish accent to a Scottish accent is like comparing a Boston accent with a Bama one and even parts of London speak differently. When in doubt, revisit “My Fair Lady.”

Okay, back to English. How did our two countries get in this “he said, she said” battle between the language we both speak? Well, let’s give credit where credit is due and tip our bowlers to the Brits as they were speaking English long before “new” England and the rest of the U.S. was even around.

Let’s start first with vocabulary. We both use the same word for many things, but in England “toilet” is “loo,” you “queue up” not stand in line, an elevator is a “lift,” you live in a “flat” not an apartment, you go on “holiday” not a vacation, and you “flick” channels not change them on a TV. Heard of fish and chips? Well, those chips aren’t really the “chips” Americans think of but rather French fries. Funny thing is that Brits traditionally call all vacuums “Hoovers,” which is an American company. I guess you could say we’re both a little crazy…or looney.

Then there’s that little thing where a Brit says they’re going to university or hospital, not THE university or THE hospital. They also spell things differently, but for that, we have someone named Webster to thank.

Noah Webster was an American lexicographer who took it upon himself to reform English spelling in the late 1700s, just in time for America to claim its independence from England. Webster wanted all words to be spelled how they sound so he changed words like “colour” to “color” and “realise” to “realize.” (My spellcheck immediately corrected the former, but if I was in England, that wouldn’t be the case.) Some in Britain call this “Spelling Imperialism,” but in true American fashion, we still use advertise and merchandise and although it might still polarize some, it is a compromise.

Brits tend to use “shall” a wee bit more than we Americans in that they would ask, “Shall we eat,” rather than “Should we eat?” They also refrain from using “do not,” saying “You needn’t get so angry” rather than “You don’t have to get so angry.” Something else the Brits do that I love is how they turn statements into questions without using the preverbial tag. In the States we’d ask, “You don’t really care, do you?” In Britain, the statement becomes a question merely by asking it as one through voice inflection and by leaving off the “do you?” 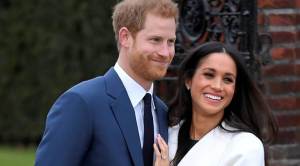 Whatever the case, we English speaking country cousins still have a mutual respect for each another and we are allies through thick and thin. Or so I think. Americans admire British rock and royalty and they appreciate our confidence and capitalism. Best of all perhaps, is that we both say “cheers” when toasting.

So cheers to Meghan and Harry. May our American duchess-to-be-bring a whole lot of stars and stripes to the UK and mix it with just a wee bit of Union Jack. She may not be Di or Kate, but one thing’s for sure; Meghan Marckle is going to bloody sparkle! Here here!