Filed under: Uncategorized — carlawordsmithblog @ 12:44 am

If there’s one thing that screams “Christmas,” it’s the bright red of a poinsettia plant. We see them everywhere, from grocery stores to floral shops, but why? Why are they the Christmas plant of choice? And what about that holiday-named Christmas cactus? What’s its story? Let’s find out! 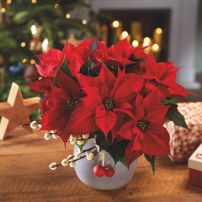 Poinsettias make beautiful additions to any Christmas décor but did you know this unofficial flower of Christmas isn’t really a flower per se? Native to Central America, the colorful parts of a poinsettia are actually the leaves of the plant, with the flowers being the small yellow dots in their centers. And although red leaves are the traditional Christmas choice, white and pink are actually quite popular too. But how and why did they become associated with Christmas?

It all goes back to a Mexican legend that tells the story of a young girl named Pepita and her cousin Pedro who were on their way to church to visit the Christ child on Christmas Eve. The two children couldn’t afford to bring a gift to leave behind so Pepita picked a bouquet of weeds on the way and left them lovingly and humbly in the nativity scene where they soon transformed into beautiful red flowers. From that day on they became known as “Flores de Noche Buena” or “Flowers of the Holy Night.” How they ended up in the U.S. and one of the most treasured Christmas traditions is yet another story with a classic American twist.

Poinsettias get their name from Joel Roberts Poinsett, who was the first U.S. ambassador to Mexico. He brought the plants back home in the early 1800s but they really didn’t become a holiday tradition until a century or so later. That’s when entrepreneur Paul Ecke, Jr. sent free poinsettia plants to TV studios across the country, which later ended up on none other than “The Tonight Show” and Bob Hope holiday specials. The trend caught on and today there’s even a National Poinsettia Day celebrated on December 12, the anniversary of Poinsett’s death.

The beautiful thing about poinsettia plants is they can last forever, even for those whose thumbs are anything but green. In fact, many will keep their foliage well into spring, especially those with lighter leaves. 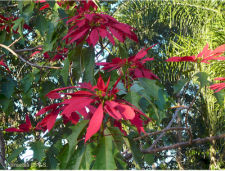 When you first bring one home and if it has foil, remove the foil so the plant can drain. It’s best to place one on a plate or a saucer and never let standing water accumulate in the saucer. Keep your poinsettia’s soil moist but don’t over water. As for sun, poinsettias do best in somewhat cool but well-lit rooms. If you want to preserve your poinsettia for months to come, cut the plant back to two buds after the last frost and set it in your flower beds or containers on your porch or patio. Wherever you put them, make sure they stay well-drained and get plenty of sun. Keep in mind that in Central America, a poinsettia shrub can grow up to 12 feet tall! Around October, you will want to put the plants in a closet, basement, or anywhere that is light-free for 14 hours a day. Come morning, move them into the light and continue this process for 10 weeks, which should take you right up to the Christmas holidays!

Other ideas for poinsettias include buying several smaller ones to group in your home rather than one big one, and did you know they also make beautiful cut flowers? To do this, after cutting the ends of a stem sear them with a candle to keep the sap from escaping, which prevents the stems from drooping. Place them in a vase with water and check the water level regularly, as they can tend to drink up lots of water! Place them on a table or mantel and take in their long-stem beauty. 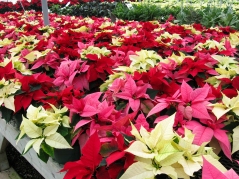 Finally, are they poisonous? Long thought to be dangerous for both dogs and children, poinsettias are really only mildly toxic and the “poisoning” quotient they afflict is greatly exaggerated. Here’s what we know: if the leaves are ingested, vomiting often occurs but since it would take a large amount of ingested leaves to be considered truly toxic, they generally don’t lead to poisoning as most animals and kids won’t eat loads of them because of their nasty taste and the unpleasant texture of their sap.

So there’s a “who, what, where, when, and why” on poinsettias, but what about Christmas cactus?

When you think of a cactus you probably think of a desert, but the Christmas cactus is said to have originated in the tropical rainforests of Southern Brazil. These plants often grow on top of other plants and among tree branches and because of their native origins, they thrive in humid conditions. And, these plants with long green arms and a rainbow of flowers can actually last for years. According to the Old Farmer’s Almanac, when cared for properly, they can live 20 or 30 years!

Known as a Christmas cactus, the plant actually has two cousins – the Thanksgiving cactus and the Easter cactus, which are very similar and get their names mainly from when they bloom. Don’t stress too much about which one you have, just focus on how to care for them. 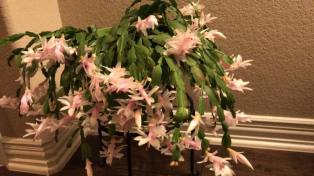 The photo above is of my dear friend’s stunning Christmas cactus that shows the fruits of proper care. Amazing and beautiful, right?

Outdoors, make sure the temperature is warm and place them in partially shaded locales. Overwatering, considered watering before the soil is dry, is the main culprit to unhealthy plants. When watering, be conservative and if possible, choose to mist them, which they love. Think rain forest here and you’ll soon see a showy plant with stems arching over the pot’s sides and flowers in colors like peach and orange, as well as the traditional pink and red.

An added bonus to Christmas cactus is that they are easy to propagate. To do so, trim a few segments off a healthy plant and put them in a small pot, preferably with some of the original soil. Care for these new sprouts just like you would the parent plant. The best time to propagate is in the spring.

In many a home it’s just not Christmas without one or more poinsettias and a beautiful blooming Christmas cactus. Now you know why this is and how to ensure your plants live up to their traditions. Have fun and happy growing!