Happy St. Patrick’s Day everyone! We are all a wee bit Irish today and I’m guessing you are wearing green as you read this as we all honor the land of leprechauns, step dancing, U2, fabulous golf, Guinness, shamrocks, and St. Patrick. But who was the saint named Patrick and why do we celebrate him in such a big way? 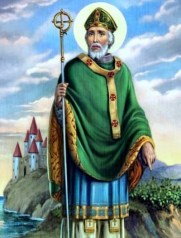 Forever tied to Ireland, Patrick wasn’t even born on the Emerald Isle but in Britain. When he was 16, young Patrick was kidnapped by Irish raiders who took him to Ireland and sold him as a salve. He spent many years there, herding sheep and turning to God in prayer. He escaped when he was 22 and made his way back to England where he spent 12 years in a monastery. Legend has it that he had a dream in which the people of Ireland were calling him back. The dream is said to have been the voice of God encouraging him to spread Christianity across Ireland and convert the pagans. Patrick returned to Ireland and began preaching the gospel, building churches, and converting many. Born of wealth, Patrick lived in poverty and suffered greatly until he died on March 17, 461. He is said to be buried in Down Cathedral in the County of Down in Ireland and ironically, St. Patrick’s Day is celebrated on the day he died, not on his birthday.

Luck of the Irish

My favorite part of the St. Patrick story is that he used the shamrock as a way to teach the Holy Trinity. The simple green plant grows abundantly in Ireland so he cleverly used it to explain the trinity: the Father, Son, and Holy Spirit. His idea was so convincing that even pagan rulers converted to Christianity. I love this story so much I use it every year with my little buddies in class.

The shamrock has three leaves and is considered a clover plant but what is the difference between it and the four-leaf clover? The latter is the result of a mutation in the clover plant that causes it to sprout four leaves instead of the normal three. These four-leaf wonders are very rare and are considered a universal symbol of good luck.

Patrick loved incorporating other traditional rituals in his lessons for both simplicity and proof. Because fire was sacred to the Irish, Patrick superimposed a sun onto a Christian cross. Today this cross, called a Celtic cross, is one of Christianity’s most popular.

Another cross, St. Patrick’s Cross of Ireland, also makes up part of the Union Jack, the flag of the United Kingdom. When you look at the flag, you can see it is actually made up of three different crosses:  St. George’s red Cross of England, St. Andrew’s white Cross of Scotland, and St. Patrick’s red one. And to be clear, the UK is considered all of Great Britain – England, Scotland, and Wales – with the addition of Northern Ireland. Ireland is considered its own republic.

River Dancing in the Streets

Funny thing is, as much as a celebration and party St. Patrick’s Day is today, from 1903-1970 it was considered a religious holiday according to Irish law, which required pubs remain closed for the day. Squeal! The law was reclassified as a national holiday in 1970, paving the way for the opening of drinking establishment doors and green beer. In the Diocese of Ireland however, it is still considered a Holy Day of Obligation, meaning Catholics are obligated to attend mass and receive the Blessed Sacrament. The fact that this year’s holiday is on a Sunday makes it even special and all the more sacred.

Stateside, it all started as a political holiday when American Irish immigrants organized themselves and commemorated St. Patrick with annual parades and festivities to demonstrate their political and social might. Ironically, there are more Irish in the U.S. than in Ireland! There are an estimated 34 million Americans who claim Irish ancestry but the population of Ireland is only 4.2 million.

St. Patrick today, along with St. Nicholas and St. Valentine, is one of Christianity’s most widely known figures and his prayers can be found among all walks of life. St. Patrick’s Cathedral in New York City is one of the city’s most popular tourist attractions. The Fifth Avenue Neo-Gothic icon ranks right up there with the Statue of Liberty and the Empire State Building. St. Patrick isn’t only revered by Catholics though. He is honored with a feast day in the Episcopal Church and is also venerated by the Orthodox Church.

Parades and festivals will happen in many places today, but perhaps the ones in New York, Boston, and Chicago rank highest. Every year the Chicago River is colored green and green beer and whiskey flow abundantly throughout the city. And it’s WHISKEY, not WHISKY. Irish spell the scotch with an added “e,” while their Scottish neighbors omit the extra vowel. American-made whiskeys also add the “e.” 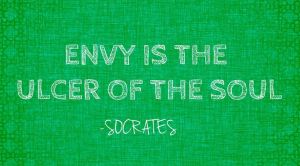 Lastly, the color green. It will be everywhere you look today and be ready to get pinched if you’re not wearing it. It’s definitely tied to St. Patrick’s Day and all things Irish, but it’s also tied to jealousy. “Green with envy” is a common saying but my lads, it’s nothing to celebrate. On this Sunday and every day, let’s try taking a cue from St. Patrick and be giving not envious. It’s a trait that will make all eyes smile, not just those Irish ones.

I leave you with one of my favorite prayers from St. Patrick: 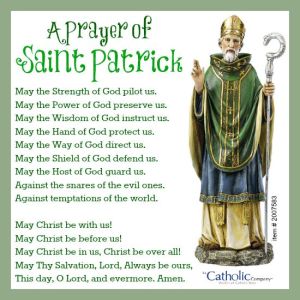 One Response to “Irish Eyes Are Smiling”