I have a handful of favorite scents: Easter lilies, gasoline, Chanel Mademoiselle perfume, a new can of tennis balls, sautéed garlic, and Play-Doh. There’s something magical about the colorful molding clay’s scent, and what better day to talk all things Play-Doh then today, National Play-Doh Day?! I not only love the smell of Play-Doh, I love playing with it, and I love the fact that something so simple is so good. So, let’s celebrate!

As with many a unique and successful invention, Play-Doh’s origin has gone through a metamorphosis and had nothing to do with fun and games. At the request of Kroger Grocery, Cincinnati-based soap manufacturer Kutol Products and employee Noah McVicker created a non-toxic and non-staining reusable modeling compound to remove soot and coal residue from wall coverings. But with the transition from coal-based heating to natural gas as well as the introduction of washable wallpaper, demand dwindled. Play-Doh, as it later became known, needed a new identity and all you teachers out there will be thrilled to know that it came thanks to none other than a teacher.

McVicker’s nephew Joe was the brother-in-law of preschool teacher Kay Zufall who persuaded them to manufacture their putty as a child’s toy because she had seen that kids found traditional modeling clay too hard to manipulate.  Joe was on board with the idea and shipped some of the product to a local school in the mid-1950s. Teachers and kids both raved so he offered to supply all Cincinnati schools with it and it officially became “Play-Doh.” 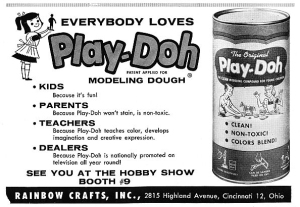 Working with no advertising budget but realizing the he had a winner, Joe took it to a manufacturers of school supplies convention in 1955 in hopes of getting it more exposure. His plan worked, as Play-Doh was picked up by Washington, D.C. department store Woodward & Lothrop and none other than Captain Kangaroo raved about it on his popular national TV show after being approached by Joe. In 1956 the McVickers formed the Rainbow Crafts Company to make Play-Doh and that same year Macy’s in New York and Marshall Fields of Chicago both opened retail accounts.  A mere two years later, Play-Doh sales reached nearly $3 million.

It wasn’t long before America’s favorite pliable putty was exported, beginning in 1964 to Britain, France, and Italy. The McVickers knew they’d hit gold and in 1965 Rainbow Crafts was issued a patent for Play-Doh and was purchased by General Mills for $3 million. Hasbro became Play-Doh’s owner in 1991 and manufactures it today through its preschool division. All of this makes this preschool teacher very happy.

As a preschool teacher, I’m forever grateful for Play-Doh. On any given day in my class, if I pull out Play-Doh and all the fun tools that go with it, kids will immediately drop what they’re doing and go at it. They love making pizzas, animals, letters, tacos, and shapes out of it and it’s so good for fine motor and other skills. Using their hands and fingers as they roll, smash, cut, and slice the dough, they don’t even realize they are getting their little fingers and hands strong and ready for future skills like writing and they’re improving their focus and creativity. It’s truly a classroom and kid-friendly win-win!

Classes and home everywhere agree, and since 1956 more than 3 billion cans of Play-Doh have been sold, which is enough to reach the moon and back three times. If you made a giant ball out of all the Play-Doh ever sold, it would weigh more than 700 million pounds and today it’s sold in nearly 100 countries and in more than 6,000 stores in the U.S. alone.

Originally only manufactured in off-white, Play-Doh now comes in more than 50 colors. A year after being introduced as a toy, it was offered in primary colors and its palette was extended to eight colors in the 1980s. Polls about which color is the most popular have revealed that Rose Red, Purple Paradise, Garden Green, and Blue Lagoon are the peoples’ favorites. With festive colors like glitter and glow-in-the-dark introduced in later years as well as gold and silver in 1996 in celebration of Play-Doh’s 40th anniversary, interest and innovation continue. Boy would I love to get my hands on some of that glitter goo or the gold and silver versions. And how much fun my students would have with the glow-in-the-dark one!

But back to that delectable Play-Doh smell. Who doesn’t love it? So many people, in fact, that for the compound’s 50th anniversary Hasbro created a Play-Doh fragrance and in 2017 trademarked the scent. The distinctive smell of Play-Doh is described by the company as “a unique sent formed through the combination of a sweet, slightly musky, vanilla-like fragrance with slight overtones of cherry” and was made for anyone looking for that scent so iconic and reminiscent of childhood.

Not only does it smell good, but for many years if you created a fingerprint in it, it would actually fool fingerprint scanners. With new and improved technology this is no longer the case, but how amazing is that?! What you can do with Play-Doh today however, is create animated characters with its “Touch Shape to Life Studio” app, which allows kids to turn their clay creations into high-tech animated characters.

One little mystery about Play-Doh is what it’s made of. Hasbro says the compound is primarily a mixture of water, salt, and flour but word has leaked that it might also contain a starch-based binder, surfactant, preservatives, hardener, and even a petroleum additive that gives Play-Doh its unique smooth feel. And gluten allergy sufferers take note:  Play-Doh does contain some wheat and may cause allergic reactions to those allergic to wheat gluten.

It should come as no surprise given all of this that Play-Doh is in the National Toy Hall of Fame in Rochester, New York.  It was inducted in 1998 and in 2003 the Toy Industry Association included it on its “Century of Toys” list made up of the 100 most memorable and most creative toys of the 20th century.

I for one will forever include it on my favorites list and for that, I thank a teacher. It just goes to show that in the end, clever ingenuity when faced with adversity often wins and that learning is fun.

2 Responses to “Learning to Play”