Preschools and Nursing Homes: A Match Made in Heaven? January 11, 2020

You could say I have the best of both worlds: my job of choice is teaching three-year-olds at our church and I’m blessed to still have my mom around, albeit she’s going to be 90 this fall and is showing signs of aging. My students keep me young but my mom keeps me worried. I am not alone in the latter, as it’s something people of my generation are facing left and right. Considering the fact that more and more people have or are moving away from home, nursing homes seem to be the only alternative for many a senior and with two income families more and more the norm, preschools and day cares are as big of a booming business as extended living facilities.

So, what if the two were combined? Sound crazy? Read on… 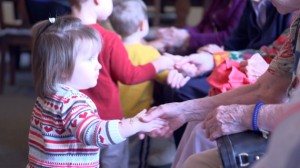 A monthly activity our school does that touches upon this concept is a couple of classes visit with and sing for our parish’s respite group, which is devoted to people with dementia. It’s amazing how much our little buddies love this early dose of “community service” and it’s inspiring how much their audience gets out of it too.

The concept of integrating preschoolers with the elderly is one that is growing and is partially thanks to Shimada Masaharu of Japan who in 1976 combined a nursery school with a nursing home. Today this type of genius integrated care can be found all across Japan as well as in Canada and the U.S. and should really come as no surprise as the Japanese are widely recognized for respectfully taking good care of elderly family members.

It’s also a win-win on so many levels.

Research shows that intergenerational programs and interaction boost energy and memory retention in seniors and build empathy, future civic engagement, and increased academic skills in kids. Amazingly, it also lowers feelings of isolation and depression in both age groups.

First and foremost is the fact that little ones learn that old people are, well, just people. It’s common for preschoolers to feel a bit uncomfortable around anyone elderly except maybe their grandmas and grandpas, so by spending fun and quality time with seniors, they are less likely to view them as incompetent, they learn to be sympathetic to their needs and challenges, and they stop thinking about old people as strange or intimidating.

It doesn’t end there. 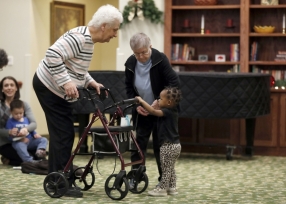 Toddlers who regularly see seniors in wheelchairs or walkers become more accepting and compassionate of peers using the same equipment. Disabilities are a common site but assisting those with them becomes comfortable. Little ones love to be “helpers” and planting early seeds of helping hands and hearts results in grown up gardens of good manners and intentions.

This important learning activity also helps fight the growing trend of ageism, a type of discrimination based on age. We live in a culture that worships youth and all things “fight your age,” so taking steps to end this way of thinking at an early age is good for all of society as whole. By having preschoolers interact with senior citizens who aren’t necessarily family members, you encourage considering them as people with a wealth of knowledge and experiences to learn from. This is said to result in grown up preschoolers who view their elders with more respect and empathy and the improvement of their social and personal development at the same time. What’s not to love? 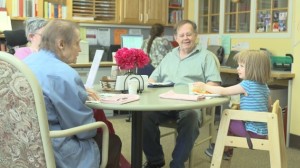 For the elderly, the benefits are just as impressive. Regardless of how high-end and caring a skilled nursing facility bills itself, residents are often lonely and isolated. Senior loneliness is a serious and growing matter but fighting off said loneliness is a difficult battle. Enter little ones.

That dreaded loneliness is diminished even in small doses as toddlers bring their own brand of energy and laughter to a nursing home and its residents. Intergenerational engagement has a way of returning life to a senior’s world and brings them back to the world of living. Boredom is also reduced, as the shared proficiency and ability level between the two age groups of arts-and-crafts, music, and literacy is somewhat equal so activities that are attractive and doable to both are easy to come by. The benefits of this are two-fold. 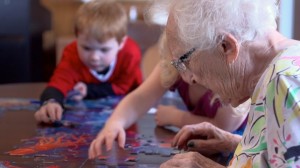 As we age we become stiff and incapable of doing many physical tasks. We also suffer from many aches and pains and disabilities. These result in seniors being less and less active, which exacerbates all of these woes. But, being surrounded by a group of toddlers brings fun, joy, and movement into their lives, which have mental and physical benefits.  In toddler talk, they’re happy and feel a part of something that’s fun!

Have you ever spent much time with a three-year-old? If so, you know they have boundless energy and curiosity and move and play with an energy not found in any other age group. They are also very convincing and persuasive and before you know it, you’re doing something you had no intention of doing. Head, shoulders, knees, and toes? Get those bodies moving! Itsy, bitsy, spider? Great hand-eye coordination. The Wheels on the Bus? Boost that memory and repetition! 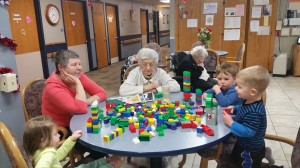 Kids are also entirely non-judgmental and open minded. We as adults often get frustrated and sad when dealing with someone with dementia and their unpredictability, endless questions, and mood swings. These things don’t bother a toddler one bit. In fact, they ask endless questions and are so unpredictable! They love repeating things and to them someone who asks the same things again and again just seems normal.

Sometimes just having someone to talk to is all the elderly crave and they seem to really open up with children in ways they don’t with fellow adults. In care facilities, seniors are surrounded mainly by other seniors, which leaves them feeling secluded and out of touch with younger generations. This is not good.

Study after study reveal a distinct link between social interaction and decreased loneliness as well as lower blood pressure, delayed mental decline, and a reduced risk of disease and death in the elderly. One Japanese study found that socializing across generations increased smiling and conversation among older adults. Call it child-like wonder. Call it Japanese tradition. Call it brilliant. 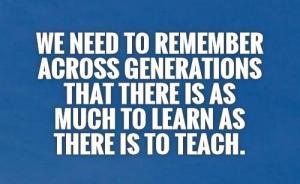 So why don’t we see more of this novel idea of combining elderly and child care? As Penn State University professor of Intergeneration Programs and Aging told “The Atlantic,” it’s a case of red tape and regulation.

“The institutionalization and bureaucracy of care homes tend to limit their ability to create opportunities and policies tend to be rigid,” he says. “How you spend your time and where you spend it is all regulated.”

Well, maybe we should rethink some policies and programs and focus on what truly benefits multiple and diverse generations. Embracing the idea of care communities of shared space between elderly and preschoolers has thus far proved to be a good one although issues like communicable diseases, allergies, liability, and facing death are still being studied.

There is yet one more advantage of the shared facility idea, that of retaining dependable workers. It’s no secret that work at a skilled nursing facility can be stressful and demanding but by providing quality child care on site for staff members, management is seeing a workplace renaissance regarding quality and loyalty. Ironically, many senior home staffers are of the age where they are caring for elderly parents while raising kids of their own. 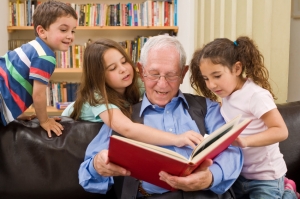 Maybe it’s all just meant to be but maybe “if it looks too good to be true, it probably isn’t.” Maybe it’s somewhere in between and worth a closer and compassionate look. All that’s at stake are generations.