We’re all in need of a little therapy these days aren’t we? My therapy consists of daily prayer and meditation, a good book or series, outdoor activities like golf and walking, and yoga. Yoga centers and calms me and like a former teacher once said, “We don’t use our body to get into a pose, we use a pose to get into our body.” My goal is not to do headstands, but to keep from being a stiff old lady who can’t bend, stretch, walk, or climb. I keep bending so I don’t break. In more ways than one.

Dogs also calm me and this morning the two…yoga and dogs…united in a most magical way. 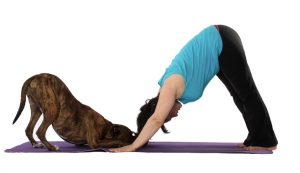 Setting up for my online Mindful Vinyasa Flow class with the fabulous Nikki, all three of my dogs decided to join me. Normally I’d shoo them away, close the door, and practice dog-free. For some reason today however, all three of them seemed very calm, and in their own dog-like ways, very mindful. They each found a spot in the room and quietly laid down. Nikki often has her dog join us so I thought what the heck? And I’m doggone glad I did!

With Boomer perched on the bed, Nikki (one of my dogs, not my yoga instructor, but how foretelling that their names are spelled the same, which is not the standard spelling?!) in her little bed, and Barry snuggled alongside my mat, we all settled in for a little namaste. All during the class I was feeling a little upper body stiff and when it came time to twist on the floor and stretch, I found myself wishing I had yoga blocks. I don’t always use them and when I did, I just used ones in my class’s studio, but I kinda felt like I needed to move the ground up to rest my bent knees as they twisted to the right. As I did so, I felt Barry was right there and so I used him as a block. I didn’t think it would go well because Barry is the most skittish of our three rescues and I thought he would immediately startle and move away.

Instead, he stayed right next to me and continued to allow my knees to rest on him. It warmed my heart and took the term “downward dog” to a whole new level! I shared all of this with Nikki and fellow class attendees when class was over and we all admitted that none of us were really surprised. As Nikki said, dogs have a way of knowing what we’re feeling and what we need.

In fact, research suggests that dogs may actually possess and experience empathy, that psychological ability to feel someone else’s emotions. Barry convinced me of this today. He felt my need for support and steadily offered it.

A study published in the journal “Learning & Behavior” found that dogs who heard their owners call “HELP!” is a distressed tone opened a magnet-sealed door to reach them faster and more urgently than when they heard the same owners recite a nursery rhyme. Think about it. How many times have we seen dogs nuzzle up to a baby, protect their owner, rescue someone trapped, and go canine crazy after being reunited with an owner? They know. They feel.

This is also confirmed by Aaron McDonald, a canine behaviorist, dog trainer, and author of “Three Dimensional Dog: A Unified Theory of Canine Behavior,” who told “Eating Well” magazine, “Dogs are always keenly attuned to everything going on in a family. They record every nuance of ‘normal’ life and become concerned if we break that pattern.” He goes on to say that yelling distresses them even when it’s not directed at them, which is something my household needs to consider especially during football season!

I’ve often wondered during the whole COVID quarantine whether our three dogs have noticed that we are home all the time now. All the time. All day and night. From what Mr. McDonald said, they do and I’m of the thinking that they love it! 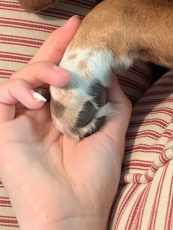 The above photo is one of Barry “holding hands” with our daughter who was home with us for 2 1/2 months earlier this summer working from home. When I saw it, I was shocked and so was she as Barry hates it when you touch or try to hold onto his paws. For some reason, he didn’t mind that day at that time. Did he sense a bit of anxiety in our daughter or perhaps he himself felt a a tad unsettled with our home’s “new normal” and the simple touch was easing. I’ll never know but I know it meant something. Something sweet and something special.

One last interesting dog connection I recently came across comes from none other than the Bible and the story about Lazarus, who demonstrated the consummate level of humiliation during those times as he was covered in sores and scorned by all. Jesus, of course, heals him but not before we read that “dogs came and licked his sores.” Some would suggest that those dogs were the original therapy dogs, including a Dominican Priest who wrote the article I read. I love this idea and something else he wrote: the Latin root words for “Dominican” are “domini” and “canis,” or “dog of the Lord. Makes total sense to me being that GOD and DOG are the same word spelled backwards!

If you know me you know. I’m a dog person so it only makes sense that one of the closest to my heart philanthropies that I try to support at all costs is “Hounds for Heroes,” which focuses on healing the wounds of war by healing veterans and their families through programs that incorporate the powerful human/canine bond. The multi-faceted and amazing program features service dogs, emotional support dogs, companion dogs, veterans helping fellow veterans, as well as professional service dog trainers and counseling. To watch a successful match develop and unfold is truly phenomenal.

Today Barry showed me something phenomenal too…that a dog who is skittish about almost everything knew when he was needed and calmly attended to the need and asked nothing in return. He did what we humans should do every day. I’m pretty sure this dog-eat-dog world would be much better for it. 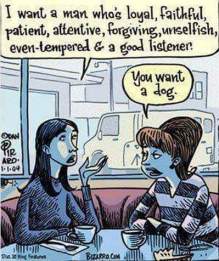 One Response to “Downward Dogs”