One of the growing list of misfortunes coming from the current COVID crisis are the many weddings and other would-be celebrations that have either been cancelled or postponed. Yes, when we’re dealing with job losses, deaths, and other more critical fallouts, a wedding may seem minor to many but to the families of the bride and groom, a cancellation or postponement are both catastrophic…and expensive. I’ve heard of several who have done one or the other and my daughter has been in or invited to many that have as well. And to add salt to the wound, they often get little or none of their money back, which is a vow no one wants to take.

But, that’s not the reason behind why I write today. I write to remind everyone about a common courtesy related to weddings and other events you are invited to.

My dear friend sent me something regarding RSVPs and she got me thinking. Do we even know what they truly are and do we really care? To me, they rank right up there with handwritten thank you notes. I’ve blogged about thank you notes before and I still say write them and send them! I’m also here to say that if I go out of my way to send you that registered wedding or shower gift, send you flowers for a death or a birth, or any other special token of my love and congratulations and I never receive a “thank you,” you probably won’t be receiving anything from me in the future.

But today’s post is about responding; not to a gift but to an invitation. Equally important so, if you’re one of the growing number of people who don’t RSVP and/or don’t send written thank you notes and aren’t teaching your kids to do so, you might want to stop reading now. Those of us with manners and etiquette won’t miss ya.

Let’s think about it for a minute. You’re having a couple of neighbors over for a dinner party. You’re expecting 12 of them and plan accordingly. But, only six show up and the other half didn’t let you know they weren’t. You’re left with a much smaller affair and a lot of leftover food and empty seats. You’re probably not real happy with those who didn’t show. Now think about these same series of events occurring but with a much larger event like a 300 person wedding. You. Would. Be. Livid. And rightly so.

Whether we’re talking book club, a casual birthday party, a medium-sized baby shower, or a large wedding, you, as an invited guest, have two obligations: bring a gift and RSVP. Okay, maybe you don’t need to bring a gift to book club, but you do need to RSVP!

Four little letters: RSVP. But, what do those four letters stand for? Most of us would say something along the lines of “the favor of reply is requested,” which is pretty close. Eaux seaux close. Somewhat surprising is that credit goes to the French, who IMHO, are not the most polite or cordial people on the planet but who in this case got it right. Oui oui!

RSVP is an abbreviation for the French phrase “respondez s’il vous plait,” which directly translates to “reply, if it pleases you.” Funny how what seems like an option is understood by the French as a demand and that’s how it’s regarded the world over.

Stateside, it all started with, not surprisingly, socialites in the 1800s. These women more than likely idolized all things French style and perhaps even English status, so they wanted to be on board the bourgeois bus and none other than manners maven Emily Post climbed on board with them.  Failing to reply to an RSVP was tantamount to social out casting and showing up to an event without doing so was equally appalling. I’m not much one for social climbing or being someone you’re not, but I gotta agree with the ladies on this one. 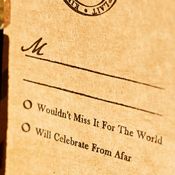 Today’s high-tech world means many a high-tech invite, but there are still plenty of paper and mailed formal invitations out there. Many of them come complete with a self-addressed and stamped reply card that you, as the recipient of the invitation, should return ASAP or before the date listed. Yep, RSVP ASAP. It’s so easy!  Simply fill out the card and pop it in the mail.

Reply cards may vary a bit as some might include a meal choice and a line to fill in, which is usually preceded by an “M.” Following the M, write in your name (Mrs. Jane Smith or Mr. Marco Lopez) and then check the “will attend” or “won’t attend” box. As the above photo shows, you can make this task a bit more fun by how you word the options.

Another spot you might be asked to fill in is how many will be attending with your party. This depends on who the invitation is addressed to and whether you are allowed to bring a “Plus One,” or guest. How do you know?  Check who the invitation was addressed to, either on the front envelope or on the inner envelope. An invitation might go to “Mr. and Mrs. Gilbert Feinstein and Family” and then the inner envelope would have written on it, “Gilbert, Sophie, Tucker, and Megan.” This means the whole family is invited so if all four are going to the event, put down four. Some invitations might just include your name on the invitation “and guest,” which means you are welcome to bring one guest. Fill in the RSVP with either one or two attendees. If an invite is addressed just to you, you’re going solo. And one more thing, never, ever ask if you can bring a guest!

If an invitation doesn’t include a pre-addressed reply card, it more than likely will have another option like an email or phone number. In any case, the rules of RSVP ASAP still apply. 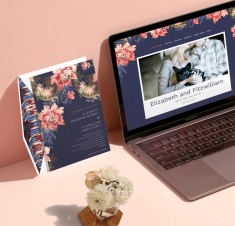 As for the growing in popularity electronic invitations available through sites like Evite and Paperless Post, you will still be given options to respond; even if it’s with a simple “yes” or “no” reply button. Just make sure you do so as these are the types of invites that often get entered on our calendars right away but then go to cyberspace black holes never to be looked at again until maybe the day of the event. RSVPs to these simple invitations are just as important as those to multi-enveloped and engraved card-stock invitations.

In all RSVP cases, waiting to see if you get invited to something better or perhaps more personally preferred is not reason to hold off on sending an RSVP. Just as RSVP ASAP rules the reply roost, so does “first come, first served.” If the date is open, it’s open for the first event you get invited to.

Then there’s the sometimes confusing but really not “regrets only” option. This simply means the host is counting and planning on your attendance unless they hear from you otherwise. No need to reply unless you cannot make it.

Most experts agree that a phone call or text is appropriate follow-up to mailed invitations while online invites often include a follow up option. Just be sure to keep it cordial and friendly although your head may be exploding at the very idea that you even have to do this, and let them know you’re reaching out to confirm they’re attending. Put it on them to have to say, “OMG! I forgot to reply and I’m so sorry to say we won’t be there.” Hopefully they won’t do that again!

If you are the sender of an invitation that will include an RSVP date, that date is important. Paperlesspost.com says a good rule of thumb is to set your RSVP deadline three weeks prior to formal events like weddings and two weeks out for more casual get-togethers like birthday parties. These are dates assuming your invitation went out around six weeks prior to the event.

So why all the fuss? Well, for one, hosts spend lots of money planning their events and it’s just plain rude to not let them know whether they should be spending any money on you. Knowing how many people will be in attendance can also determine where to hold an event and even what to serve. It may sound like it’s all about money but it’s also all about manners.

As much of the world continues to venture into a less formal and more casual way of life, I’m of the thinking that some things should never change. Being grateful and being polite are not “formal.” They are courteous and gracious, decent and respectable. Nothing old-fashioned about that. You can thank me later for this one.

4 Responses to “Do Them a Favor”