Filed under: Uncategorized — carlawordsmithblog @ 12:21 am

Who knew a snowstorm could bring such joy to a region, a city, and my neighborhood?  After being locked-up and quarantined for nearly a year now, kids and grown-ups alike took to the streets in a peaceful protest of warm and sunny weather and reveled in quickly found jackets and gloves as uncommon snow fell from the sky and did so for an entire day. Dogs scampered and sniffed. WFH and homeschooling took a quick pause. People were silly and a lightness filled the snow-filled air. It was beautiful. Big, fat, fluffy flakes falling from the sky for hours on end. Snowmen were made, sleds were created, and social media was filled with snow many photos. Oh wait, did I mention this happened in Central Texas, where in mere days temps are predicted to be in the 70s?

Friends and family out west and up north laughed as we shared photos with them and went on and on and on that it was “still snowing!”  Sorry guys, but our elation was as pure as the driven snow we were gazing at and we chose to make snow angels! Yes, we’ve had snow before, most of the time a mere dusting that wreaks havoc but is gone before photos can even be uploaded. Yesterday it was a snow day like I remember while growing up in the Rocky Mountains or like in my husband’s hometown of Buffalo. During the winter months growing up, my elementary school PE class on Fridays consisted of hopping on a Greyhound bus and riding it up the mountain for ski lessons. I loved every minute and to this day, when I smell a bus, it reminds me of that happy snow-filled moment of my life.

And speaking of Buffalo, it’s where Wilson Bentley’s amazing library of snowflake photographs is housed at the Buffalo Museum of Science and yes, those are real photos of real snowflakes! I cannot think of a more perfect place for it then Buffalo, also home of the famous Blizzard of 1977, the butt of many “lake effect” snow and weather jokes, and those lovable Buffalo Bills who, in a show of perfect timing for my household, had just a day prior won their first play-off game since 1995. Go Bills! We are snow excited!

Buffalo is also where I experienced and totally enjoyed eight feet of snowfall one Christmas. Yep, eight feet. It started snowing Christmas Eve and didn’t stop till sometime after New Year’s. We were literally snowed in there for days but it was one of our family’s most memorable Christmases. It was crazy. It was beautiful.

That’s what folks in these parts thought yesterday as up to six inches fell and accumulated city-wide. It was a thrill for all and seemed to almost wipe clean the miserable stain of the previous week and election cycle. It may not be able to actually wipe away a virus, but for one glorious day it wiped away hate, animosity, and stress. 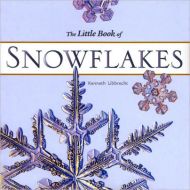 I’ve always loved snow and that “Little Book of Snowflakes” is one of my favorites. I actually have it in our powder room at this very minute for guests to look through as they take care of business. The photos in it are amazing but author and photographer Kenneth Libbrecht was not the first to capture the delicate objects on film. That honor belongs to Mr. Bentley.

Bentley’s obsession with snowflakes began more than a hundred years ago on a small farm in Vermont. Young Wilson had an unquenchable thirst for knowledge and was extremely curious even at the earliest of ages. He quickly became enthralled with his school teacher mother’s microscope and began studying rocks, birds, and everything in between. But it was snowflakes that fascinated him the most.

He concocted a way to collect the fragile flakes and began drawing them in a notebook. He later asked for a camera, which he trained himself to work and eventually attached a microscope lens to. It was in 1885 that he captured the earliest known photo of a single snowflake. He continued improving his photographing skills and snowflake collecting techniques and was asked to write about his methods and findings. Being an introvert though (yay introverts!), he first hesitated  but eventually agreed and was later featured in articles in the likes of “Popular Mechanics” and “National Geographic.” His 1931 book, “Snow Crystals,” features some 2,400 of his amazing images.

It is said that no two snowflakes are alike and that billions of them fall during one snow storm. Billions. Not all are beautifully symmetric but all are amazing in their own way, some no bigger than the head of pin but still decorated with a unique pattern. As for the largest snowflake ever recorded, it was found in Montana and measured 15 inches in diameter. Oh how dear old Mr. Bentley would have loved to have photographed that one!

There is something calming and peaceful about snow. Yeah, don’t tell that to the people of Buffalo or other places that get tons of snow every year, but I personally love a beautiful snow storm and the calming energy it brings with it. Speaking of snowy cities, which one do you think got the most snow during the last year? Here is the official standing of the snowiest cities of 2020: 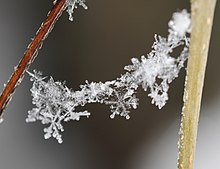 A snowflake isn’t a frozen raindrop, as many might believe, but rather a single crystal of ice that grows directly from water vapor in the air as the snowflake slowly drifts to earth. In short, a cloud is made from countless microscopic water droplets and when one freezes, snowflakes result. Simply moving from place to place within a cloud produces an infinite variety of different shapes of flakes, their patterns emerging as they tumble through the clouds and the air.

In the end, it was just one day. One magical day though. We did wake up to snow-filled yards the next morning, but save for a few shaded patches, it’s all but melted away. What a delight though to see how that same snow melted many a heart for a brief day in a most taxing period of time. I for one am snow grateful.