There’s a running joke between me and my daughter. Any time we are driving in an unfamiliar area and the risk of getting lost or taking a wrong turn is high, we jokingly say, “I hope we don’t end up in Tempe.”

You see, neither of us have any sense of direction and when she lived in Scottsdale, no matter how hard we tried to find our way somewhere we’d more often than not take that wrong turn and see the sign saying “Welcome to Tempe.” We knew right then and there we needed to turn around and start up our maps app.

Thank goodness for maps apps.  Even my husband, who has an amazing sense of direction, relies on what I affectionately call “Poopsie” to get him where he’s going in unfamiliar territory. Funny thing is, once he’s gone somewhere say two or three times, he no longer needs Poopsie. I, on the other hand, can return somewhere again and again and yet still end up in Tempe if I don’t use a map app. Come to find out, I am not alone.

Reporter Dr. John LaPook of “CBS Sunday Morning” recently did a fascinating piece on this very subject and I learned so much. For one, animals are amazingly adept at sense of place. Polar bears in particular are great navigators as they migrate north-to-south every year, as are snow geese.  We look up at a “V” of geese or any birds flying above and think how cool it is and how cool it looks, but it’s actually a navigational tool and a sort of “follow the leader.” They all flawlessly fly together using visual clues, the position of the sun, and their sense of smell to get them where they’re going and quite possibly to safer ground. For many in the animal kingdom, this makes perfect sense because they often live where getting lost could very well be the end of them. The same could hold true for us humans.

“People are bad at sense of direction but ought to be good at it because if you lose your way it’s a threat to survival,” Temple University Professor Norah Newcombe told LaPook.  Yikes!

Getting lost in Tempe or Tulsa may not threaten my survival but there are areas of many places that mistakenly venturing into very well could. So what can we learn from directionally blessed animals? Awareness is key; be aware of what’s going on around you. Look for visual markers that stand out to you and pay attention. I sense a solution here.

All of our senses, in fact, are involved in forming a sense of place, which is coded in the very wiring of the brain. Think of it all as a sort of internal map system of specialized nerve cells that track where you’re headed and where you are in relation to landmarks. Landmarks. Key word here.

When driving (or walking or hiking or cycling or maybe even boating) into unchartered territory, keep a mental track of landmarks you pass. These don’t have to be the Lincoln Memorial or Wrigley Field, but can be something as simple as a Dairy Queen or a water tower. A national park ranger also suggested to LaPook to every now and then look back from where you came and notice those landmarks. This will hopefully help in both remembering how to get somewhere the next time and returning from where you came should you be making a round trip. Yeah right my lost brain is telling me as I write this. No chance. But, I guess it’s worth a shot, right?

But, when I think about it, the “look back and look and landmarks” cue might actually work for me as I’m one of those who hates when someone says “go east on I35 then turn south onto Avenue A.” No thank you. I need  “left and right” directions rather than “east and west,” so “Turn left at third stop sign then go right at the big white church” is just what I need. And, don’t even get me started on boat navigational terms. Winward? Leeward? Bow and stern? Port and Starboard? Ugh! 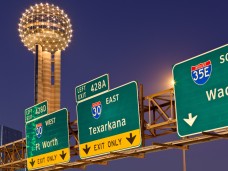 Exits in big cities can be challenging for me, as I want a simple “Exit north (okay…in this sense it makes sense) onto I20,” but they often are “Exit north on I20/Exit 24B/County Road 682 Dallas.” Do what? I do however, love that many states use mile markers and incorporate them into exits. These help me prepare for that confusing exit lurking up ahead.

This whole idea of recognizing and tracking our environment is so respected that a Nobel Peace Prize was awarded in 2014 for a study that proved your brain creates maps of where you’ve been. My brain clearly didn’t participate in that study and if it had, it would have definitely lowered the bar when it came to learning, remembering, and connecting routes. My husband’s on the other hand, would have proved them right.

Which brings us to the age old question of “are men better navigators then women?” You know the joke, a man would rather get lost then ask for directions but are they really better at human navigation? There’s no simple “yes” or “no” answer to this, but it’s quite telling that men can escape from a maze faster than women and are more likely to take shortcuts. Whatever.

Manly or not, many a male today relies on their technical navigation tools to safely get them from Point A to Point B. But, Newcombe is not a fan as she says they are bad for our sense of direction in that if you rely on them too much, you aren’t forming an overview of your environment. I for one am putting my money on Poopsie rather than the Professor for this one.

While researching this blog, I ran across some fun and interesting info about our nation’s highway system I thought I’d share. Some of it I knew; some I was thrilled and surprised to learn. Enjoy!

Despite how confusing highways and their signage might feel sometimes, our nation’s highway numbering system actually makes sense once you know how it works. Highways that run east/west have even numbers while those running north/south have odd numbers. An easy way to remember this is “E for East.”

As for those other “route” numbers, they too have a reason. Numbers of even-numbered routes increase from south to north, which is why in the southern US I10 runs between Santa Monica, California and Jacksonville, Florida while the higher numbered I90 runs between Seattle and Boston.

Finally, any route numbers divisible by 5 are considered major arteries among primary routes and designed to carry traffic long distances. Examples would be I10 and I95.

So, you’re driving along an interstate or route of some sort and you come across signage. There’s a method to their madness as well.

One of the best and most useful yet little known things about signage on Interstate highways is that the positioning of the Exit Number on the sign tells you if you’ll be exiting right, left, or straight.

Most exit signs will also include Mile Marker numbers, which start at the state line when you cross into a new state or at the beginning of that an Interstate.

Usually, Exit numbers correspond to the mileage markers on the Interstates. If you are in the middle of nowhere and need assistance, providing emergency personnel with the nearest mile marker can be crucial to finding your location. This is why you should pay attention to the mile markers during your road trip.

And finally, leave it to Texas to lay claim to the highest numbered mile marker with Interstate 10’s Mile Marker 880 and its corresponding exit in Orange, Texas. And, it’s not only the highest numbered mile marker and exit on any freeway in the U.S., but in all of North America. In essence this means there are 880 miles of that I10 in Texas, which is one long drive for anyone.

While we’re talking highways, let’s talk about two of our country’s most iconic and famous ones. First, Highway 1.

Highway 1 is a major north/south highway that runs 2,370 miles along the east coast from Key West, Florida to Fort Kent, Maine at the Canadian border. It is the longest north/south road in the U.S. and is generally considered the easternmost of the main north/south U.S. highway system although parts of others run closer to the ocean. Construction of the U.S. Interstate Highway System resulted in I95 becoming the major north/south east coast highway in the late 1960s but US1 is still a favorite of many.

On the west coast you’ll find the equally symbolic Highway 101 or US 101. The nearly 1,550 mile long road runs through California, Oregon, and Washington. It is also known as El Camino Real and is the westernmost north-south route in the U.S. Highway System.

The highway travels from the East Los Angeles Interchange, the world’s busiest freeway interchange, to Tumwater, Washington. In between, it runs through a greater portion of L.A. and is also called the Hollywood Freeway, Ventura Highway, and other monikers while traversing through the San Fernando Valley, Thousand Oaks, Santa Barbara, and many other locales. It goes across the often photographed Bixby Creek Bridge and the Golden Gate Bridge but although US 101 remains a major coastal north–south link on the Pacific coast, it has been replaced in overall importance for transport by I5.

I’ve been fortunate enough to have driven “The 101” and stood at the “end of the road” of Highway 1 in Key West and will say, they are both memorable. So, as Willie would say, get “on the road again” and maybe check them out. Just be sure to take Poopsie with you.