Students are headed back to school and school supplies are being bought up in stores coast to coast. I love school supplies and can totally relate to the above meme. Notebooks. Highlighters. Binders. Calendars. Planners. Folders. Markers. Sharpies. Glue sticks. Post-its. White Out. Pens. And, of course, pencils. I love them all.

As I write this, if I glance at the wall in front of me in my office, I see a giant pencil hanging on the wall. And I mean giant. It’s one of my favorite pieces of “art” and brings a bit of whimsy and color to the room.

When our daughter was school-aged, no matter the age, I was that mom who hated the pre-packaged and boxed up school supplies. I longed to take her to every Target and Office Max in the area and stock up on everything and anything. She should feel lucky but am not sure it’s on the top of her “Why mom mom is awesome list.”

If she were to make such a list, maybe she could use some fun colored pencils, which are always fun to write and draw with. Again, doubtful.

Or maybe she could use a fat pencil or a little golf pencil, which BTW are great for early writers as they are the perfect fit for their little hands.

Yes, I love pencils and all things office supplies. Sooooo……when I came across a story about a man who sculpts delicate works of art on the tips of pencils I took notice. I think you will too. 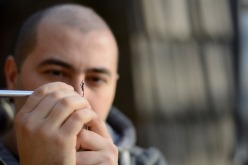 Jasenko Dordevic is a Bosnian sculptor who has erased the improbable when it comes to works of art by carving miniature sculptures that are not only stunning but mind-boggling. Inspired by lead artist Dalton Ghetti, Dordevic has been creating sculptures on the tips of graphite pencils since 2010 and loves the fact that pencils, long used as tools for making art, are now art themselves. Amazing, right? Here are a few samples of his truly amazing work courtesy TOLDart.

I don’t know what kind of pencil Dordevic uses but I do know this school supply loving blogger decided to pencil in time to learn all about the writing tools we take somewhat for granted. What exactly is the famous No. 2 pencil and why is it called that? Why are most pencils that signature yellow-gold? Intrigued? Read on. 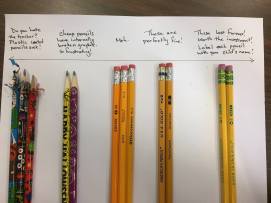 The photo above shows a variety of pencils and was posted by a mom to demonstrate that the prettier the pencil does not always mean the longest lasting or best bang for your buck. We’ve all bought them and we’ve all been frustrated by crumbling leads as we try to sharpen them. Come to find out that Ticonderoga pencils are hands down the most popular and respected among those who know. Tico what?

It all started back in 1812 when curious ship captain son Joseph Dixon discovered a love for experimenting with graphite found on his dad’s boats. The young entrepreneur mixed the mineral with clay and water, rolled it into strips, and baked it in his mom’s oven.  He later pressed it all into cedar wood and the first Ticonderoga pencil was born.

Dixon went on to amass graphite, iron, and steel factories and during the Civil War, when soldiers were seeking a more practical alternative to the quill pen for writing home, Dixon’s pencils became widely popular and the Dixon Crucible Company was soon making 86,000 pencils a day. Today the company (thankfully!) makes a wide variety of writing utensils, including colored pencils and golf pencils.

It wasn’t until 1913 that the yellow No. 2 Ticonderoga pencil was introduced. Originally made with a brass ferrule, it was temporarily changed to green plastic due to a metal shortage during World War II but returned to its now-iconic color and metal ferrule after the war. 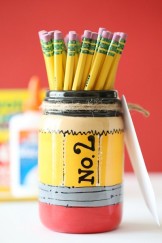 So what exactly is a No. 2 pencil? It all has to do with the graphite grading scale and a pencil’s location on it depends on the hardness of its graphite core. The higher the number, the harder the core is and the lighter its written marks will be. A No. 2 pencil is the second darkest, is considered by many as the perfect pencil, and is sometimes also called an HB pencil. It has a soft core and leaves darker marks but it they and other “soft” pencils dull faster and require more frequent sharpening.

So who really invented the pencil? Most agree that the ancient Roman writing instrument called a stylus is the granddaddy of them all. Scribes used the thin metal rods to leave a readable mark on papyrus, the early form of paper. Graphite entered the picture in England in 1564 and was a writing hit. Graphite “sticks” were originally wrapped in string but were later inserted into hollowed-out wooden sticks. Sounds like the first ever wooden pencil to me!

Stateside, William Monroe, a Massachusetts cabinet maker, is credited with making America’s first wood pencils and none other than author David Thoreau was known not only for his writing skills but for his pencil making ones as well. Who knew?!

But why yellow? Amazingly, pencils have been painted yellow ever since the 1890s as the best graphite came from China where yellow is associated with royalty and respect. American pencil makers wanted people to know the very best graphite was used in their pencils so they painted their pencils yellow to symbolize a regal and crowning achievement following European producer Koh-I-Noor’s lead in painting their lead items yellow. 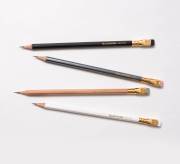 Then there’s the Blackwing pencil, favored by the likes of John Steinbeck, Stephen Sondheim, Leonard Bernstein, Quincy Jones, Duke Ellington, E.B. White, and Looney Tunes creator Chuck Jones.  Crafted in the 1930s by the Eberhard Faber Pencil Company, the pencil with the celebrated rectangular eraser became synonymous with quality and was considered the calligraphy pencil of all pencils. But then, in 1998, Blackwings were discontinued and a buying frenzy ensued, including one by Sondheim who reportedly bought a lifetime supply of them. Thankfully, the pencil was re-introduced in 2010 and cult-following number two has ensued over a number No. 2 pencil.

I leave you now with the above graphic of colorful pencils with traits and virtues we should all strive for as well as two things having to do with school supplies, pencils, or both. One, is that as kids return to school, many don’t have the supplies they may need, particularly art supplies that allow them to create and learn at the same time. Enter “Painting Pandas,” a nonprofit dedicated to giving art tools and visual art lessons free of charge to the underserved and who may not have access to them and ages 5-12. Check them out at paintingpandas.org.

Lastly, “The Parable of the Pencil” has always been one of my favorites and what better place to put it, then “write” here? Thanks for reading…and writing. Keep leaving your mark, sharpening your skills, erasing your mistakes, and focusing on what’s on the inside. It’s what makes you and all pencils special. 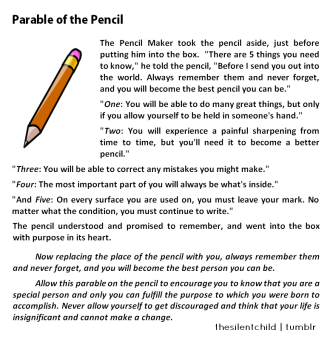