Halloween is quickly approaching and as much as I’m thrilled that, after a year of being masked up, kids can once again Trick-or-Treat this year and hopefully the only masks they’ll be wearing are those that go with their costumes. Still, let it be known I am not a Halloween fan. I don’t like anything ghoulish or scary and I really don’t like dressing up in a costume. In fact, almost any invite that requires a costume is almost certainly a “no” for me. Yes, I’ll do it for the most special of cases, but I will never choose to do it on my own or suggest it be done.

As a kid, this wasn’t necessarily the case as I have very fond memories of my simple either Tweedy Bird or Caspar the Friendly Ghost costumes that consisted merely of a flimsy yellow or white cape-like costume and a plastic face that was more Jason from “Friday the 13th” than anything friendly. Maybe the key word here is simple. The more elaborate the costume requirement, the less I’m prone to put it on.

If you don’t believe me on any of this, ask our daughter. She swears she doesn’t like Halloween much either and blames me. I was never that mom who went all out for her child’s Halloween costume but, I am also proud to say that one of her costumes was award winning. We still laugh about it today. 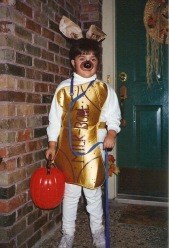 Our church was hosting a pre-Halloween fest for parish kids and being the dog lovers that we are, we (okay I) chose what was really a dog costume for my sweet daughter. It was a giant Milk-Bone dog biscuit that a real dog would wear horizontally on their long body (think maybe Lab or Golden Retriever) but our girl wore it vertically. I added some home-made ears out of one of her hairbands, a fake nose, a (gasp!) leash around her neck, and voila! The cutest costume ever was born. And get this; her unpretentious little costume won the costume contest that night! Yep, she beat out the most elaborate get-ups and came home top dog and dog-gone proud. You could say it was probably one of my proudest Halloween moments.

I’m also pretty proud of costumes my husband and another couple and I wore one year. She and I hand hand-painted a giant “Y,” “M,” “C,” and “A” on four separate white t-shirts and then we each donned either a cowboy hat, army helmet, hard hat, or police officer cap and became The Village People. We thought we were so clever (and what an easy costume!) but didn’t realize till later that many of the photos we took were of “ACMY” rather than “YMCA.” Oh well, give us points for creativity.

Yet another easy-peasy costume I put together for my hubby and I was “The Graduate.” He had recently attended an honorary university event and was sent an elaborate graduation gown and motar board to wear to it, which later made the perfect Halloween party costume with me on his side wearing an animal print pillbox hat, black pumps, and a cocktail dress. Yep, I was Mrs. Robinson! Here’s to you! 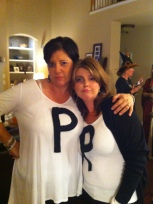 Finally, a dear friend and I once dressed as the then popular band The Black Eyed Peas by simply donning a painted on black eye and white t-shirts with a big “P” on them. Again, I’m all for simple. 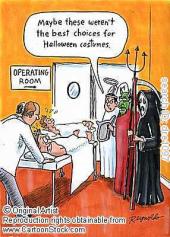 So Carla, as you’re lying there on the couch show me on this puppet what you don’t like about costumes. This might be what a therapist would ask me in addressing my aversion to costumes. First and foremost I don’t like the hassle. Put me in scrubs and I’m a doctor or put me in a white jacket and white hat and I’m a chef. But, it ends there. I’m okay with conceptualizing something clever or elaborate but my creative juices dry up when it comes time to shop for all the necessary pieces. 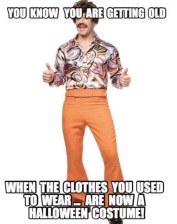 So there you have it…my take on what many of you might consider one of your favorite holidays. You have fun buying your costumes and I love you for it. I’ll enjoy looking at all your photos but until then I’ll be right here unmasked and unafraid.