It’s the Most Wonderful and Stressful Time of the Year December 9, 2021

Tis the season for stressing out and burning out. But does it need to be? Isn’t it instead supposed to be wonderful?

Maybe it’s time we all just say no. No to over committing, over spending, over trying, over decorating, and over everything. It’s actually very sad that the most wonderful time of the year is often the most stressful. Funny how we currently see the word “peace” everywhere but don’t often feel it or foster it. Let’s start right now and give peace a chance.

It’s hard; I know. I’m the list maker of all list makers and tis the super bowl of list making seasons. Gift lists. Party lists. Decorations lists. Food lists. Lists of lists. But think about it, how much of all that is really essential?  Really essential?

Let’s start with gifts. Maybe it’s time to do a re-evaluation of who you exchange gifts with. My hunch is that if you asked many of them, they’d be all for ending whatever gift exchange tradition you may have. As for kids, stop buying them everything they want and ask for. I’ve mentioned many times on this blog that since our daughter was born 28 years ago, she has only received three Christmas gifts (and maybe a little surprise in her stocking.) If three gifts were good enough for Jesus, they are certainly good enough for the rest of us. I also like my friend’s three gift idea of something you want, something you need, and something to read. How about instead of stressing your mind and your bank account out by buying everything on their list, you consider this:

Decorations are another doozy. I’m one for not putting up Christmas décor until after Thanksgiving, which makes Thanksgiving just that and not pre-Christmas, but I do feel the stress of having to take down all my pumpkins and turkeys immediately after and putting up our loads of Christmas decorations. 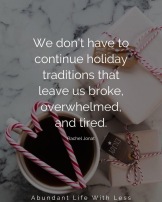 This year, I’m taking it a bit slower. Our decorations are out, out tree is up and the lights are strung on it but I’ve yet to hang to ornaments. I love our ornaments and I don’t want to feel rushed or pressured when unpacking them and hanging them up. I want to enjoy doing so and if that means not doing something else or waiting to do it, so be it. Taking the joy out of this joyful time creates unjoyful stress, drags us down, and depletes us.  Let’s instead do less and be more. 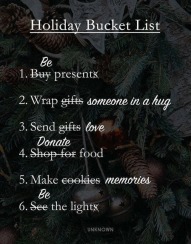 It’s all about measuring less on what’s on your calendar and more on what’s in your heart. Let things go. The line at the grocery store? Let it go. Your neighbor’s light display is bigger and bolder than yours? Let it go. Squeezing in that nail appointment? Let it go. Trying to accomplish too much? Let it go.

Speaking of that, if you tend to prove who you are by what you do or what you accomplish, news flash: it’s time to ask why. If a full calendar makes you feel important, take a good look at your appointments and commitments and decide what’s important, desired, and matters. Maybe, just maybe, consider giving and doing 90 percent rather than needlessly extending yourself at 110 percent. Good work never comes from someone who is overworked.

There’s a popular saying in Italian that says, “Dolce Far Neinte,” the sweetness of doing nothing.” I know it’s hard but also try doing nothing. Yep, nothing. Don’t stress about over-decorating and RSVPing “yes” to every invite. Doing nothing, as my girl Courtney Carver of “Be More With Less” reminds us, allows you to listen to your heart rather than all the chatter out there. Doing nothing will actually give you the energy to do something. Something you want to do. Something purposeful. Something mindful.

In today’s age of experts everywhere and on everything, it’s a bit comforting to realize Jesus came into the world as a baby, not an expert. He wasn’t born in a castle or to a king and queen and later ate with sinners and outcasts. He was actually a very simple guy. Simple, my friends, is good.

That simple guy proved this once again in the story of Martha and Mary. Invited into Martha’s home, she gets upset with Mary who sits listening at Jesus’ feet and leaves all the planning and prepping to Martha. Hostess with the mostest Martha complains to Jesus about Mary’s lack of help, only to be told by Him that Mary was to be commended for being still. Ouch. Truth be told, I’m a Martha. Big time Martha. Time to be more like Mary.

Celebrating Jesus’ birth should be peaceful, not stressful. He longs for us to rest in Him not be busy because of Him. It’s hard though, as that uninvited guest named Anxiety shows up on our doorsteps every Christmas. This is especially the case for women, who often bear the brunt of shopping, cooking, decorating, and all the details that go with. All the Marthas out there can often be overwhelmed and complain.

This Christmas however, this Martha is trying my hardest to not have a Martha Christmas, but a Mary one. Here’s hoping all of you also find joy and peace this Christmas season and many silent nights.