Filed under: Uncategorized — carlawordsmithblog @ 12:31 am 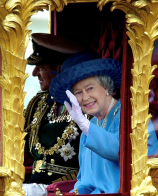 Waking up today without a queen. It’s all still sinking in. It’s so very weird to think I’ll never see her again in that carriage or on that balcony. She was never considered a classic beauty like Princess Diana or Grace, but she proved beauty is way more than skin deep. Oh sure, I never met her and I’m clearly not from Great Britain, but like much of the world, I am sad. And for any of you who live under a rock or simply don’t stay informed, here’s why: Her Royal Highness Queen Elizabeth II died yesterday. She was 96 and was the world’s second longest-serving monarch. (France’s King Louis XIV reigned for 72 years, ranking him numero un.) In a word, she was living history and today I’m celebrating her life. 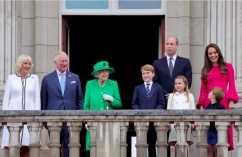 It was a life filled with joy and sadness and she has valiantly been at the center of so many historic events. As a young woman she witnessed the horrors of WWII and as a mature monarch she lived through the challenges of a pandemic. Perhaps 1992 was among her most challenging, a year she famously described as an “annus horribilis” as her family fractured and Windsor Castle caught fire. Princess Diana’s death is 1997 was a tough one too and you could say she’s not been quite the same since Prince Phillip’s death is 2021 and Megzit, when her grandson Harry and his American bride Meghan turned their backs on Harry’s royal background and family and fled to Hollywood. And yet, she handled it all with grace and dignity. She never complained and was a remarkable loyal servant. She was devoted to serving her people and duty was of utmost importance to her. She apparently had a wicked sense of humor too! 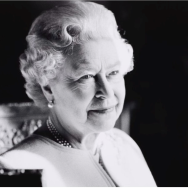 Time out here. Any of you who know me know I love royalty, particularly the British Royal Family (with the exception of a few). You also know I was and still am a bit obsessed with the late great Princess Di. Many of you called, texted, and messaged me yesterday saying you were thinking of me. So sweet! Today though, it’s all about Queen Elizabeth II, whose death officially brought an end to the second Elizabethan Age. It was a historic reign and yesterday was a historic day. Funny thing though, the longest reigning queen was never really supposed to be one.

It was her uncle, Prince Edward, who was next in line to the throne after his father King George V. But, in true scandal fashion, Edward abdicated the throne when he was not allowed to marry his American socialite love, Wallis Simpson, who was twice divorced. They ended up marrying but were considered persona non gratas in “The Firm,” which is what the House of Windsor is often referred to as.

So, in comes Elizabeth’s father and Edward’s younger brother, King George VI, who was named king. But he ultimately died at a young age, and so Elizabeth, at an even younger age and as his eldest child, became Her Majesty the Queen in 1952 at the age of 25. Even the beginning of her reign is the stuff of legends. 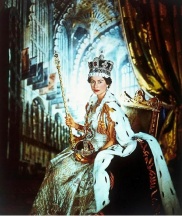 Young Elizabeth is crowned Queen in 1952. Let’s think about that for a minute. 1952. Harry Truman was U.S. president and get this; Joseph Stalin was head of the Soviet Union. And she was 25! What were you doing at 25 and could you have led a bevy of nations and done so with poise? Her amazing reign spanned 15 British prime ministers, 14 U.S. presidents, and seven popes. She is the last surviving head of state to have served during WWII and she reigned for roughly 30 percent of U.S. history. Again my friends, we’re talking history here.

What we’re not talking however, is ruling. You’ll notice “reign” is what she did. Queen Elizabeth never “ruled.” Even as Her Royal Highness, she was more of a ceremonial leader than actual ruler. The power to govern rests with Parliament but the Queen did appoint the nation’s Prime Minister and met with him or her weekly, as seen in “The Crown.” Fittingly, this monarch for life worked until the very end, appointing new Prime Minister Liz Truss just two days before her passing. Her official title was “Elizabeth the Second, by the Grace of God, of the United Kingdom of Great Britain and Northern Ireland and of Her Other Realms and Territories Queen, Head of the Commonwealth, and Defender of the Faith.” Whew! That’s a mouthful even in a beautiful English accent!

The last part means she was also head of the Church of England, which has been the case for each sovereign since 1534, when Henry VIII’s divorce debacle led him to renounce the Catholic Church and basically start his own.

To be sure, the Queen of England wasn’t just queen of England, She was also Queen of Scotland, Wales, and Northern Ireland, which make up the United Kingdom; and Queen of nations that make up the Commonwealth and include Canada, Australia, New Zealand, the Bahamas, Belize, Jamaica, and others as well as a host of other territories, including Bermuda, the Falkland Islands, and Gibraltar. At her death she was also head of state or recognized as Queen in wholly independent sovereign states too many to list here. Trust me, it gets confusing so I’m not even going to try to hash it all out. 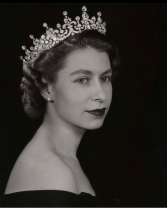 Pretty big job for anyone, right, much less a young sheltered lady living in the 1950s? It was a man’s world and yet she mastered it brilliantly. You could say she was the original working mom and that’s just one of many reasons why Queen Elizabeth was voted one of the top three most respected women in the world for years on end. Amazingly though, you never saw her being bossy or arrogant. She likely despised today’s “all about me” and “my feelings” mantras and very well could have been the last dose of sanity in an ever growing insane world. She was the constant steady and stable amid constant changes even when her family and the events around her weren’t. I’m confident that we will never see another like her and that yesterday marked the end of an era.

Note: You hear the terms “UK” and “Great Britain” thrown around a lot so here’s the proper particulars. Great Britain is an island on which most of England, Scotland, and Wales are located. The United Kingdom is all of Great Britain plus Northern Ireland and is a country and sovereign nation that exists as a political union between the four countries. These countries have their own local governments and autonomy but are not considered sovereign nations, meaning they can’t negotiate international treaties or declare war. Basically the UK is a political term and Great Britain is a geographical one.

Good to know, right? Here are also a few fun facts about the Queen. She was the first monarch to be featured on British bank notes, never took a driving test and wasn’t required to have a driver’s license, and could travel the world without a passport. Oh to be queen!

Queen Elizabeth fittingly passed at her beloved country estate Balmoral Castle in Scotland. An outdoorswoman at heart, she loved riding her horses and roaming the grounds. And I love that she loved dogs! Princess Di, on the other hand, notoriously hated going there and it was where Charles learned Diana had been killed in that car crash in Paris. I wasn’t happy with how the Queen handled Diana’s death but I do admire how she allowed it to soften her stiff British upper lip and monarchy just a bit. She was steadfast in tradition but knew when it was wise to change with the times. It all comes full circle at a castle in Scotland.

Charles had to once again leave Balmoral under somber circumstances and now we have King Charles III who upon his mother’s death, immediately became king although no specific schedule has been announced for his official coronation. This will take me some getting used to as will “Queen Consort” Camilla. I cannot help but imagine what a glorious Queen Diana would have been if Charles had been the husband she deserved and just can’t stomach Camilla actually being queen.  It will likely be a short reign for the two lovebirds as, at 73, he became the oldest to assume the throne. Fingers crossed that he continues his mother’s style of reign and if anything, stays politics-free even though he hasn’t as the Prince of Wales. 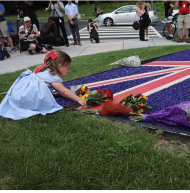 So here we find ourselves, mourning along with Britain again. It won’t hit me like Diana’s death did, but it’s a mourning unlike many will see in their lifetimes. Charles delivered a touching and beautiful address to the nation today as he called the Queen “muh-mah” and appeared emotional at times. I LOVE that he named William and Kate Prince and Princess of Wales and concluded his address with words that gave me chills and brought a little tear to my eye. In part, they were: 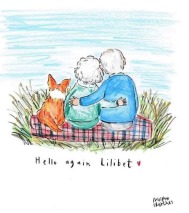 “To my darling Mama, as you begin your last great journey to join my dear late Papa, I want simply to thank you. May flights of Angels sing thee to thy rest.”

I’m pretty sure angels are rejoicing and welcoming an angel of a queen to the ultimate castle and throne. Well done Lilibet. Beloved mother, matriarch, and monarch you’ve earned a well-deserved rest. God’s speed your highness.

NOTE: As monarch, the Queen will be given a state funeral. Per Buckingham Palace, “Following the death of Her Majesty The Queen, it is His Majesty The King’s wish that a period of Royal Mourning be observed from now until seven days after The Queen’s Funeral.” It’s expected the Archbishop of Canterbury will lead the service and in the days prior, the Queen’s body will lie in state and the public will likely be able to pay their respects. What I would give to be there!

One Response to “A Queen for All Ages”