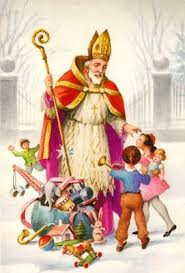 Happy Feast of St. Nicholas! A popular guy the world over, he really was a saint…in so many ways. Considered the “first Santa,” good ole St. Nick wore a red coat like Santa, had a white beard, and loved to share and give. He’s also mentioned in the classic “The Night Before Christmas.” Who knew?!

A very rich and generous man, St. Nicholas heard that a poverty-stricken dad was going to have to sell his daughters into slavery so the saint that he was he secretly tossed bags of coins into their house. The money landed by their stockings, which were traditionally hanging on the fireplace to dry. This, my friends, is why we hang stockings on fireplaces and put treats in them!

And why do we give treats and presents? Well, think of the 3 Kings, or Wise Men as they’re traditionally known. They brought gifts to baby Jesus and by giving to others, we model their generous act. As I mentioned yesterday in my blog, our daughter only gets three presents at Christmas, which has been our family tradition all her life. If three gifts were good enough for Jesus, they are certainly good enough for the rest of us!

I’m writing this in what many Christian churches call Advent. This past Sunday was the second Sunday of Advent and on it a second candle on an Advent wreath was lit. The purple candle is called the “Bethlehem Candle,” demonstrates Faith, and reminds us of Mary and Joseph’s treacherous journey to Bethlehem that was filled with worry but faith.

On the first Sunday of Advent, which begins the season of Advent four weeks out from Christmas, a purple “Prophet’s Candle” is lit as we focus on Hope and Jesus’ coming. This coming Sunday’s pink “Shepherd’s Candle” reminds us of Joy and the birth of Jesus. On the last Sunday of Advent, the “Angel’s Candle” of Peace is lit. Some Advent wreaths also add a fifth white “Christ Candle” is the middle, which is lit on Christmas. Advent officially ends on Christmas Eve.

The word “advent” comes from the Latin word that means “coming.” During Advent, Christians patiently await the coming of our Savior, Jesus Christ. An Advent wreath is made up of various evergreens, representing continuous life, as well as four candles that symbolize the four weeks of Advent. Three candles on the wreath are purple and one is pink. They signify Christ being the light of the world and the contrast between darkness and light.

Growing up my family didn’t really celebrate Advent and my childhood home never had an Advent wreath or the other popular item, an Advent calendar. We basically had Jesus and Santa. 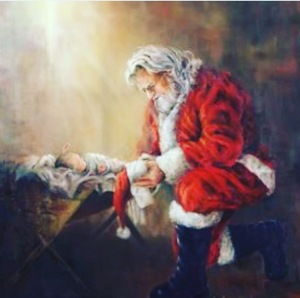 All of these things explain some age-old traditions and also demonstrate the true meaning of Christmas. It breaks my heart to see the real reason for the season become increasingly “offensive” and secular, and my hope is that by sitting back and understanding why we have days off in December and why stores love this time of the year, we will realize that there is so much more to it all than just time off, shopping, and Santa. I have hope.

One Response to “St. Nick, Advent, and Why Do We Give Gifts?”