It Was the Best of Times and the Worst of Times: The Oscars February 29, 2016

Oh, the Oscars. I stomached as much as I could last night and kept going back to the yawn fest wondering all the while, why. Joining us was my niece and nephew-in-law. He is from Japan and it was the first time he’d ever watched American classic. Needless to say, I was a bit embarrassed for the U.S. The glitz and glam just weren’t there. Instead they were once again replaced by social and political whining.

I thought Chris Rock was funny at first, but his constant racial jabs grew tiresome real fast. And the politics. Double yawn. Sam Smith, a singer no less, wins an OSCAR and all he talks about is his sexual orientation. Leo wins his first Academy Award and proceeds on a tirade about climate change. People, you make millions pretending. Please stop pretending you can also save the world. But I digress…

Moving on to what really matters…the gowns! Here then is my recap:

Charlize Theron once again owned the red carpet in her amazing fiery red Dior. Just knowing she would be on the red carpet would make me say, “Okay, you win” even prior to the event. Case closed next case.

And shame on me for saying Hilary Swank hasn’t been heard from in years in my pre-Oscar blog. The girl still has it and this Michael Kors number that she graced the after parties in proved it. Loved the sparkles. Loved the simple slitted skirt. Even loved the shoes.

I also thought Naomi Watts looked stunning in her embellished Armani Prive as did sweet Jennifer Gardner in black Versace. Ben who? 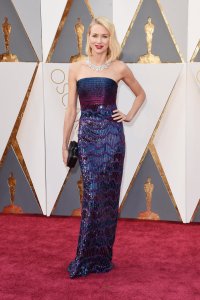 A wicked case of “who wore it best” goes to Reese Witherspoon in Oscar de la Renta and Tina Fey in Atelier Versace. Both purple numbers were stunning but can you say awkward?

I thought Rachel McAdams killed in in this body con green August Getty stunner, which as my niece said, consisted of very unforgiving fabric. 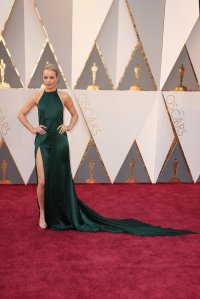 Mindy Kaling. Who knew? She looked fabulous in this blue and black off-the-shoulder trained Elizabeth Kennedy. One of my “best dressed” for sure. 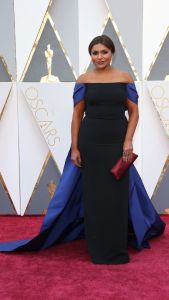 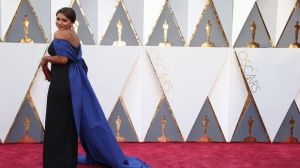 As obnoxious as she is, Sarah Silverman cleaned up well (at least in her clothing) in this understated and chic Zac Posen. Now if we could only work on her mouth.

Sofia Vergara generally looks hot on every Red Carpet albeit similar to any previous one, but I did like her strapless navy Marchesa ball gown. The girl knows what works on her curves and brings it. Every time.

I swooned over the movie “Brooklyn” but didn’t swoon over Saoirse Ronan’s emerald green Calvin Klein sparkler. I liked it but didn’t love it. And what’s up with two different earrings and why didn’t anyone ask her about them?

Best Actress winner Brie Larson looked flowy and airy in her ruffled periwinkle Gucci but again, it was okay to me. Didn’t love it. Didn’t hate it. (Hated her hair though…more on that later.)

I have to include OU grad Olivia Munn in this elegant one-shoulder Stella McCartney. So simple and so stunning but orange? C’mon Olivia!

Kate Bosworth wasn’t on the Red Carpet but when I saw photos of her at after parties in this gray Ralph and Russo I knew she had to make my list of faves.

Every year there is that one couple that kills it. Brad and Angelina. Matthew and Camila. George and Amal. This year that award goes to Jennifer Flavin and Sylvester Stallone. Her black Saint Laurent was breathtaking. Sly might not have won the Oscar but his wife took home the gold fashion-wise. (Speaking of couples, can someone please get Gwen Stefani a dress? We get it girl. You stole the much younger husband but you’re a mom of boys! Hash tag act your age.) 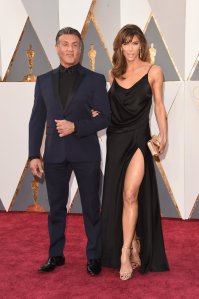 Now for the hair. I thought it was so underwhelming last night. Middle part. Slicked back. No style. But that’s just me. Thank you Reese for keeping it real.

My “in between” look…wanted to love but something kept me from doing so…was Rooney Mara’s. There was just too much going on for my liking. I loved the beading and the winter white, but would have adored it more minus the slit and the layered bottom. And as Shawn Mullins one time sang, “she’d be a whole lot prettier if she smiled once in a while.”

As for disappointments, hate me all you want but I thought Cate Blanchett’s gown was just that, disappointing. Commentators called it sea foam green, I saw 80’s mint green. And, as my niece commented, it was very “arts and craftsy.” Totally agree. It was a Pinterest creation well-done.

This truly breaks my heart to write, but Jennifer Lawrence was no bueno last night. The black lace tiered gown just didn’t live up to her impeccable Red Carpet rep. First time she’s failed to impress and it hurts. 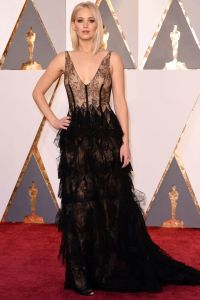 Then there’s super model Heidi Klum. Did I say super model? Then why does she always stink up the Red Carpet? Heidi, please, get a new stylist. 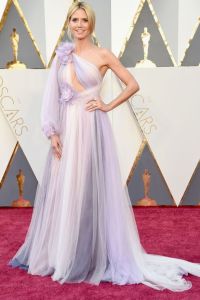 But, my worst dressed of the night? Newly crowned “Sports Illustrated” cover model Ashely Graham. The plus-sized sensation is everywhere now, but when she showed up on E! News’ Red Carpet coverage show I about died. No, no, and just no.

What about you? Agree or disagree? Who were your favorites? Who wasn’t? Please share!

One Response to “It Was the Best of Times and the Worst of Times: The Oscars”