I had to laugh at myself yesterday.  I watched the NFL playoffs all day (including pre-game shows and post-game interviews) and then later settled in for some “Downton Abbey” DVR watching.   I went from playoffs to proper in seconds flat!

Yep, that’s pretty much me in a nutshell.  A crazy contradiction of styles and interests.  I love football and sports in general, but I also love swanky restaurants and a classic pair of Monolo pumps.   Football, food, and fashion.   Carla defined. 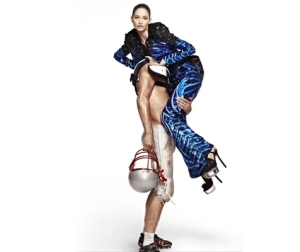 Maybe that’s why I thought I died and went to heaven when I read about Bloomingdale’s football helmet/fashion designer event.   Super Bowl XLVIII will be in New York February 2 (well, it will actually be played in New Jersey, but most fans will celebrate in NYC not Newark) so what better way to combine New York fashion with New York football then designer helmets?  I’m dying!

Now before you think this is just a boring football blog, read on!  Or at the very least, check out the pretty photos below!  I think you’re going to like this one even if you don’t like football.

The venerable Manhattan department store has teamed up with the NFL and the Council of Fashion Designers of America for “Fashion Touchdown,” a unique collection of customized haute couture helmets designed by some of today’s hottest fashion designers.  All of which will be auctioned off for charity. 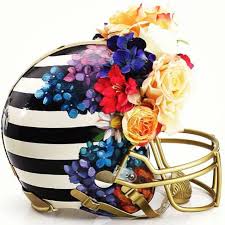 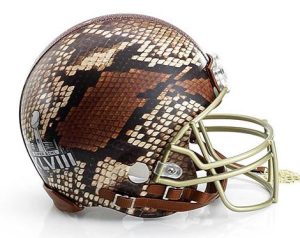 What I wouldn’t do to have even one of them sitting right next to Smitty’s and my Buffalo Bills and Oklahoma Sooner helmets in my house!  But, bidding is sure to be high considering the helmets are now on display through February 4 in Bloomingdale’s iconic 59th Street window.   If anyone would like to bid on one (for me?!) you can do so at Bloomingdales.com/superbowlhelmets.  (Here’s a time I could sure use that “click on a link I mention” addition I want to add to my blog!)

It’s all very fun and very pretty, but it’s also all for a good cause, with 100 percent of net profits going to the NFL Foundation, a non-profit dedicated to improving the health and safety of sports, youth football, and communities nationwide.  Monies raised will go to supporting the building of athletic fields and youth fitness zones, youth and high school football teams in need of new equipment or facilities, and much more.  Last year the program also provided $1.5 million just to launch “Heads Up Football,” a comprehensive approach to promote a better and safer game.

This excites me on so many levels I can’t even deal.  The Super Bowl in one of my favorite cities on earth with my favorite childhood team, the Denver Broncos, playing in it and designer helmets simply a click and fat check away?   Dream on, Carla, dream on.  Super Bowl tickets, lodging in NYC, flight to JFK, Rachel Zoe designer helmet, and all things New York.  Priceless.  But, way out of my price range!   You can’t penalize a girl for dreaming though, can you?