Filed under: Uncategorized — carlawordsmithblog @ 3:15 am

Enough. Just enough. Enough of the political correctness police and every one being offended by everything. I swear this country has turned into a nation of wimps and “my way only” whiners. I thought I’d seen and heard it all…until today.

That’s when I was browsing social media and came across reports that the Prisoner of War flag is suddenly being considered offensive by some because it, according to a column by Rick Perlstein in Newsweek magazine, “distracts the American public from atrocities waged by U.S. troops against people overseas.” People who were trying to kill Americans Mr. Perlstein! I’m not sure what the last war was that Perlstein fought in, but as presidential candidate Ben Carson recently so eloquently said, “There are no politically correct wars.” Amen Mr. Carson, amen.

The other item I ran across that made me scream out loud was on the very “offensive” recruitment video produced for and by Alpha Phi sorority at the University of Alabama. The video, which also features a Bama football player, has been deleted from cyberspace for all time because it “lacks diversity and objectifies women.” Oh dear. Call the troopers people, this is a bad one.

Really? Can you say grow up people; grow a pair?

All of this later had me singing to Kacey Musgraves’ delectable song, “Biscuits.” Here are the lyrics. I think we can all learn something from them.

Nobody’s perfect, we’ve all lost and we’ve all lied
Most of us have cheated, the rest of us have tried
The holiest of holies even slip from time to time
We’ve all got dirty laundry hangin’ on the line

Hoe your own row.

Own your own crazies.

But rather than live by these simple rules, Americans instead are fighting the fight against everything from flags to team names. It’s almost like people are looking for the next trendy something to be offended by. Oh, but unborn human baby body parts and the religious rights of Christian bakery owners? Yeah, they don’t count. 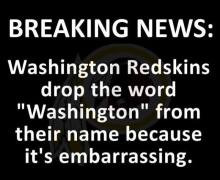 Amazingly and actually totally contradictorily, while we’ve become a nation of intolerants, we at the very same time are preaching that we should tolerate everything and everyone. You can’t have it both ways people. You just can’t.

Let’s go back to the POW flag controversy.

The commonly flown black and white flag was conceived by Mary Hoff in 1971. Hoff’s husband, Navy pilot Lt. Cmdr. Michael Hoff, was deemed Missing in Action in January of 1970. Hoff called Annin Flagmakers of New Jersey and talked about creating a flag to represent all POWS and MIAs. The task was assigned to World War II vet Newton F. Heisley who modeled the flag’s silhouette after his son who is a Marine. Today the flag is the only non-national flag that any federal government anywhere in the world has mandated to be flown regularly.

Okay, I get some of it. The Dixie flag? I can see how it might be offensive to some, but to the point where we can’t watch “Dukes of Hazard” on TV or have confederate hero statues in public places? Cray-cray.

Instead of arguing and fighting about what’s offensive and what’s not, I’d love to see America once again become a nation of victors, not victims. Winners, not whiners. What’s happened to us? Maybe it’s time we all take a deep breath and mind our own biscuits. Maybe, just maybe, life will then be gravy.