Can we talk? Can we talk about Melania Trump and how stunning she is? Here’s where I wait for all the haters to stop reading.

Okay, for all those of you who are mature enough to call a spade a spade or put away your bitterness, let’s talk.

Truth be told, there’s not a stable or honest person out there who can’t agree that our new First Lady killed it on Inauguration Day and on so many other occasions. 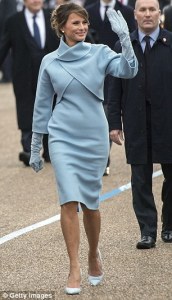 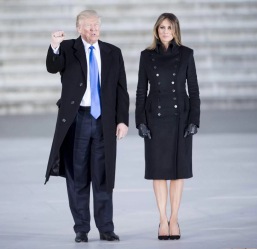 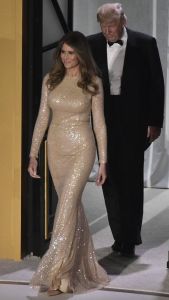 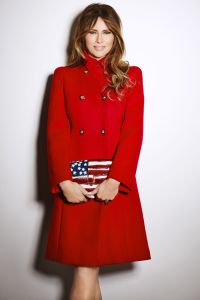 This being the case, it should come as no surprise that Melania Trump knocked it out of the ballpark on her first official international tour with her husband, President Trump.

So why, are we not seeing her on popular fashion blogs and magazine covers. Because, hate trumps respect.

Fashionistas used to love both her and Ivanka and even put them on countless covers. 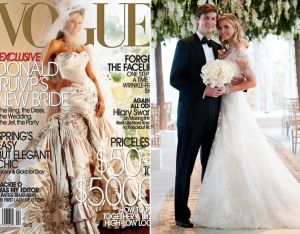 But not no mo. Why? November.

Sad to say we saw more of Bella and Kendall’s Cannes Film Festival fashion than our First Lady’s stunners in Saudi, Israel, and Europe. And while I have you, can someone please remind me what films Bella and Kendall were in? We also saw a lot of the Pippa and Kate show for Pippa’s wedding. But hey, they’re real life royalty.

I will admit both Bella and Kendall are gorgeous and on most days I do admire their sense of style. But then again, they are models. They have one job and it’s to look fab.

A former model herself, Melania puts the “F” in fab and is not only gorgeous but smart. She speaks five languages (English, French, Italian, German, and her native Serbo-Croatian) and is her own woman, choosing to live in New York until son Brandon’s school is out rather than uprooting her son and following her husband to D.C.

She’s also an immigrant and the first naturalized citizen to become First Lady. Melania was born in Slovenia, which was then communist Yugoslavia, and earned her American citizenship in 2006.

Prior to Melania holding the FLOTUS title, all we heard for the past eight years was how gorgeous and stylish Michelle Obama was as First Lady. The flared skirts, the kitten heels, the arms. Politics aside, I have to admit I just didn’t see it. Yes, some of her choices were lovely but I personally do not put her right in the “gorgeous” category and I’ll call those flared skirts with an A-line, those kitten heels with stiletto pumps, and those arms with…okay checkmate. But for the overall winner, Melania trumps all. In a word, she is simply stunning.

For proof of this, I present “Melania’s Foreign Stage Debut.”

Melania started her trip in an orange leather Herve Pierre skirt, cream Max Mara knit sweater, and nude stilettos as she boarded Marine One that had everyone saying “wow!” Pierre also designed the lovely white gown she wore to Inaugural balls this past January. 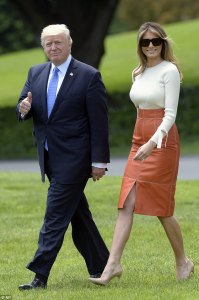 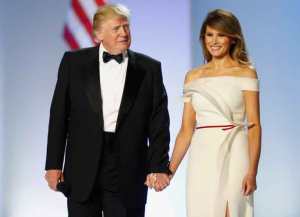 In Saudi Arabia, she caused quite a stir by not wearing a headscarf but I applaud her and am on board with saying had she worn one, haters would have likely criticized her for not standing up for women’s rights.

Arriving in Saudi, our First Lady was not only stylish but respectful in a stunning black Stella McCartney jumpsuit with gold detailing on its high neck and paired it with a striking gold Saint Laurent belt and conservative black pumps. 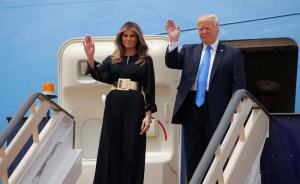 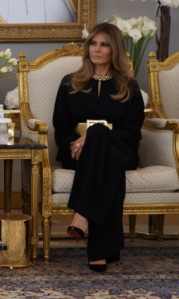 Later in Saudi she donned a traditionally-bent Ralph Lauren khaki shirt-dress that she accessorized with a chunky brown belt with thick white stitching. The 47-year-old completed the sleek look with zebra-patterned Manolo Blahnik pumps that featured a high stiletto heel. 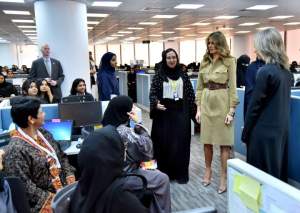 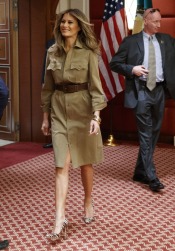 For the Arab-Islamic-American Summit, Melania made a business-chic transformation into a tailored white Dolce & Gabbana pantsuit and black blouse with a ladylike bow detail. Black Manolo Bahnik pumps completed the look. 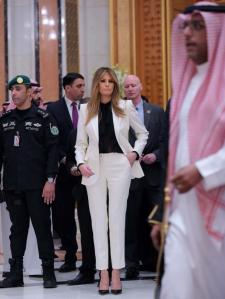 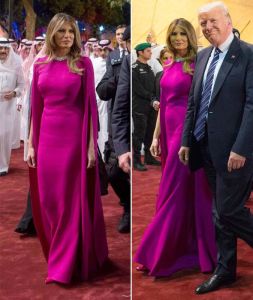 On to Israel, where our First Lady was poised and polished in white.

The notched hem and collar Karl Lagerfeld jacket and skirt she wore in a photo opp was stylish and sleek and the Michael Kors skirt suit with yet another wide belt that she wore to pay respects at the Wailing Wall was paired with the red and white version of her previously worn zebra print Manolo pumps. Do I sense some signature looks here? Hey, if Kate Middleton can wear the same shoes over and over, Melania can too! 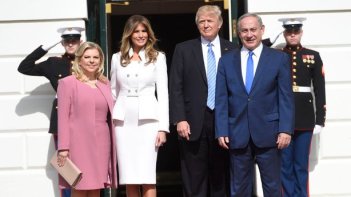 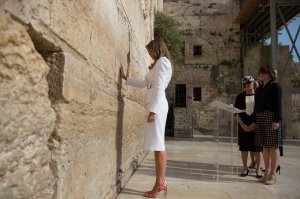 The white hot fashion continued with a sleeveless dress with bands of white and off white made by Serbian-born Roksanda, which the First Lady paired with those same nude pumps to attend a moving memorial service. Roksanda also designed the striking white dress with poof sleeves that Melania wore to the Republican National Convention. 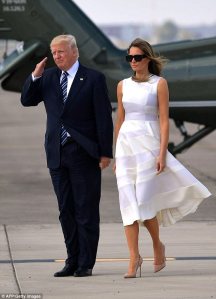 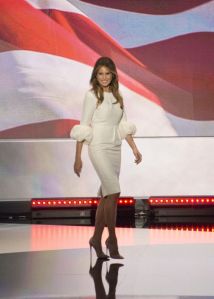 Then, it was off to Europe, a place known for all things fashionable and stylish. The well-traveled Melania however, was more than up for the challenge.

In Italy, she was both reverent and refined yet oh-so chic.

From the moment she landed, donning a custom-made Dolce & Gabbana black coatdress with gold brocade details on the collar and sleeves to the black A-line stunner and loose chignon in her hair upon leaving Italy, Melania was on point and a big hit. 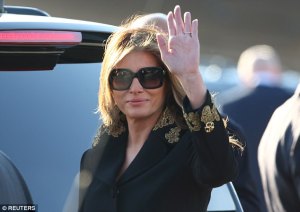 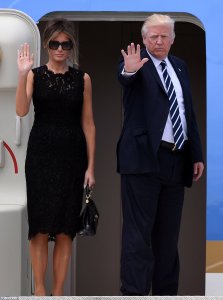 In between, she was elegant in white as she posed with U.S. Army members who she graciously thanked on Instagram for scuttling her and her staff around and showed her playful side as she took selfies in a Rome children’s hospital. 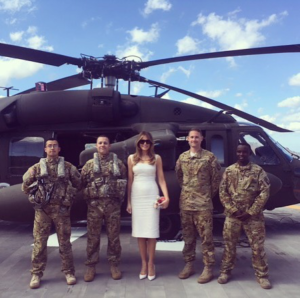 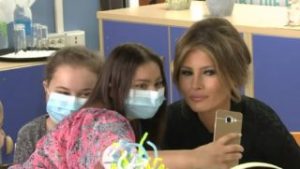 Perhaps her moment though, was the black lace dress, matching lace pumps, and veil she wore to meet Pope Francis. Yes, she covered her head at the Vatican but not in Saudi, and for good reason. Melania is the first practicing Catholic First Lady since Jackie Kennedy, but she is not a practicing Muslim and was “allowed” to not cover her head during her visit to the monarchy. She respects the strict dress codes forced upon Saudi women and was thoughtful in her clothing choices while there, but she also refuses to compromise her own beliefs and pretend to be something she’s not. 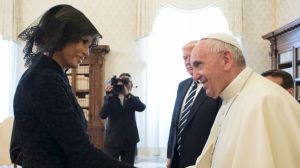 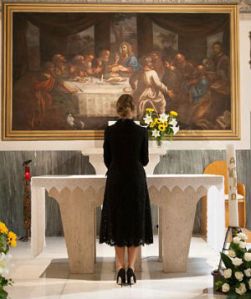 Mrs. Trump kept it toned down when she arrived in Brussels in a conservative Michael Kors blue and white gingham belted coat and matching shoes, proving she’s both in style and on trend. She stayed on trend in a blush suit made by Belgian designer Maison Ullens that included her signature wide belt and striped pumps. 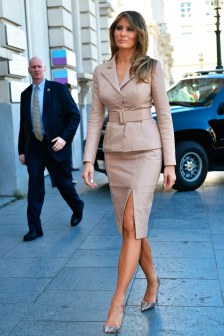 Lauded in Saudi for her “classy and conservative choices,” Melania spiced it up a bit in Europe. The burst of color D&G coat she wore in Sicily was anything but boring, while the shimmery silver dress with matching D&G pumps she sparkled in for an evening concert with G7 leaders was a true “I have arrived” statement. 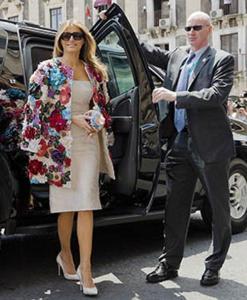 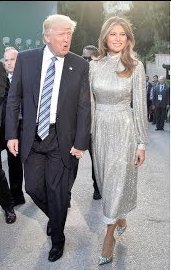 She wasn’t perfect though. I didn’t much care for either the dress or shoes she chose when meeting NATO wives but hey, no one is perfect right? 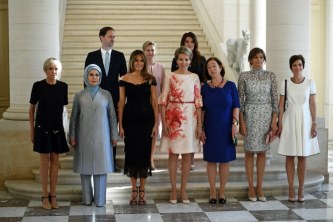 Melania Trump is basically a quiet and reserved woman who has been thrusted upon the world stage in a big way. But she’s also very smart and worldly. She knows how society works, how the media operates, and how to make the right impression. I feel confident in saying Melania not only proved she can hold her own but that for the next four years (maybe eight), she should also own the fashion pages. Can I get a high five? 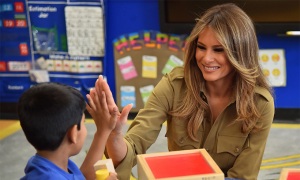