Valentine Would Have Loved It February 16, 2020

Valentine’s Day may have come and gone, but shouldn’t its message of love stick around all year? Long after the roses have died, the cards have been tossed or saved, and candies have been eaten, the love behind them should not similarly disappear. That’s how St. Valentine would have wanted it and that’s how he lived. Yes, there was a real man really named Valentine and maybe it’s time to learn about him and why we even have a Valentine’s Day. Consider this blog my way of keeping his message of love alive long past February 14. 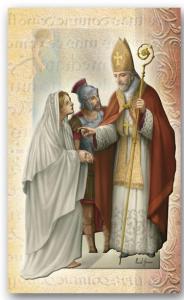 Valentine was a third century priest in third century Rome. (Call me crazy but it’s my personal opinion that it’s quite fitting that the Saint of Love comes from Italy!) During that time, Claudius II was emperor and at some point decided that single men made better soldiers than those who were married. He outlawed marriage for young men in hopes of building a stronger military but Valentine strongly believed people should get married and thought the decree was unfair so he continued to secretly marry young couples. When Claudius found out about this, he sentenced Valentine to prison.

While imprisoned, Valentine was relentlessly asked to renounce his actions and his faith but he refused. Sent to another prison, Valentine is said to have written little messages to family and friends to let them know he was well and that he loved them. He was also befriended by a guard whose daughter was blind. Valentine would preach to and pray with the guard, who had asked Valentine to heal his daughter’s sight. It is said that just days before his execution, Valentine prayed over the girl, touched her eyes, and she regained her eyesight. Word traveled fast, and upon hearing about the miracle, many turned to Christianity. Claudius was not amused or impressed and quickly condemned Valentine to death. The night before his execution, Valentine wrote to the young girl and signed it, “From your Valentine.” The phrase became popular among lovers even back then, and today is still used on cards everywhere. Stoned and beheaded on February 14, 269, Valentine was buried near Rome and a Basilica was erected in his honor.

Not only is Valentine’s Day a holiday in the U.S., it’s celebrated worldwide. In Japan, chocolate is considered even more sacred and “valentine-ish” than even stateside while in Denmark flowers are also given to loved ones on the holiday. In both Italy and Germany it’s strictly an adult and “lovers only” holiday while Mexico officially calls it the “Day of Love and Friendship.” St. Valentine is considered the Patron Saint of Spring in Slovenia but perhaps the holiday is celebrated in the most grandest of ways in France. In Paris, known as the “City of Love,” couples used to attach locks on the Pont des Arts Bridge and throw keys into the River Seine on Valentine’s Day, but the practice was halted due to the weight of the locks and their potential damage to the historic bridge.  The French village of St. Valentin is decked in flowers on Valentine’s Day and is a popular destination for weddings, vow renewals, and engagements. How lovely would that be?! 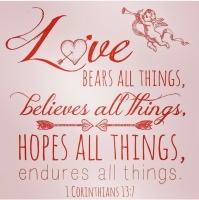 St. Valentine is the Patron Saint of love, young people, and happy marriages, which makes me happy being that I was married a day later on February 15. Considering the fact that Valentine saw to it that couples were united in marriage, it makes perfect sense that the holiday of love is named after him. He would have loved it!

Valentine’s favorite words were “Love one another as I have loved you” and I’m thinking they’re pretty good words for all of us to live by. On Valentine’s Day and every day.