I saw the above witty meme this week in the midst of all the gloom and doom, and despite the seriousness of the COVID-19 pandemic, I found it and some other humorous ones a nice break from the darkness. I also found it timely, as a few weeks ago some co-workers and I (back when we were going to work) were talking about our astrological signs and were amazed to discover that our signs often matched our personalities.

I’ve been wanting to blog about this subject but it seemed a little insensitive or superfluous considering the times, but after seeing the above, I thought, “why not?” We all need a daily brain drain, so let this be it as we take a brief break from the Corona Virus news and sit back with some other “CV” news: Capricorns and Virgos…along with all the other signs.

When researching for this blog, I turned to none other than the American Federation of Astrologers, which was founded in 1938. According to the AFA, Babylonians are generally credited with the birth of astrology. They used astrological charts to predict seasons and celestial events and for more than 2,000 years astrology and astronomy were considered the same science.

Babylonia astrology was introduced to the Greeks in the early 4th century BC and through the studies of Plato, Aristotle, and others, it became a highly regarded science and was soon embraced by the Romans whose zodiacal signs are still used today. Let’s look at them.

Do these apply to you according to your sign? I am a Taurus and many of its traits most definitely apply to me. Yep, I don’t like change but will do what’s necessary, often underestimate myself, appreciate honesty and truth, am stubborn, and tend to stay true to myself and to myself. 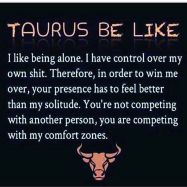 Again, pretty much me to a T, which may explain why I’m fairly comfortable with all this “social distancing” and #stayhome orders. Sadly, my zodiac sign gives no comfort for worry or anxiety, which is totally messing with my control issues.

How about you? Are all you Libras idea driven but detached emotionally? Scorpios, are you able to read people and are protective and compassionate? Do any of you read your daily horoscopes? 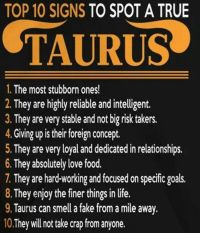 Those could actually be “Top 10 Signs to Spot Carla,” as all 10 describe me spot on. As I said, I’m stubborn as an ox (or bull?) but I’m also very reliable, loyal, and hard-working. I cannot stand anything fake or phony, love to learn, and I don’t put up with much BS; unless perhaps if food or something “fine” is involved! If you don’t believe me, ask my husband.

He is a Leo and is yes, intense, direct, strong, tough, not fond of clingy people, gets things done quickly and in a “no nonsense” manner, but is more giving and forgiving than one would think. Our daughter is also a Taurus. I went into labor on my birthday and she was born the next day at 3:30 in the morning. So, I like to say my hubby thinks he’s the Lion and king of the jungle, but he lives/lived with two Taurus females so there’s really no bull as to who truly rules the roost, right? 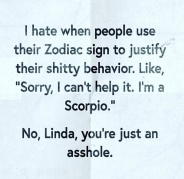 Fittingly given the current state of affairs, earliest astrology was used to bring a sense of order out of chaos and was used to predict weather patterns for agricultural and other purposes. It was eventually broadened to include forecasts of natural disasters, wars, and other catastrophic events.

So let’s see, COVID-19 was first brought to our attention in Wuhan, China in December 2019, right? That would put it under either Sagittarius or Capricorn, depending on the exact date, which we will probably never really know.

Sagittarius is a fire sign while Capricorn is an earth sign. Yeah, pretty sure fire has rained down on planet earth by way of a highly contagious virus; a virus that is truly stubborn and remains somewhat of a mystery like earth signs and intense and strong like fire signs. But this is just my thinking and I’m no astrologer or astronomer; although my science of choice in college was Astronomy!

The word “zodiac” was derived from the Greek word for “circle of animals” and its meanings and signs are believed to have been developed in ancient Egypt and later adopted by the Babylonians. Early astrologers knew it took 12 lunar cycles/months for the sun to return to its original position. They then identified 12 constellations linked to the the seasons and assigned them names of animals and people.

Each of these signs have assigned dates of birth for each person, which are:

Horoscopes, which I won’t go into, are short forecasts for people born under a particular sign and based on the positions of stars and planets at the time of that person’s birth. The word “horoscope” is derived from the Greek words “ora” and “scopos,” which mean “time” and “observer.”

I am not a big believer in horoscopes but I’m forever amazed at how often the traits of one’s astrological/zodiac sign match their personality traits. Many think of astrology as superstitious and without any scientific basis, but whatever yours or my thoughts are, its popularity is stronger than ever today. Maybe people are searching for meaning and direction or maybe they’re just looking to find a deeper meaning of themselves and their lives.

How about me? I don’t lean on horoscopes or astrology to guide me, but I can’t argue with the fact that I’m all of the above and I own them all. I’m passionate, extremely observant, a deep thinker, and actually enjoy a little argument or debate as long as they’re not personal and are constructive. Provoke me however, and I might explode. My husband calls it “that Spanish anger.” Hmmm, come to think of it Spaniards love their bulls and their bullfights. Ole!